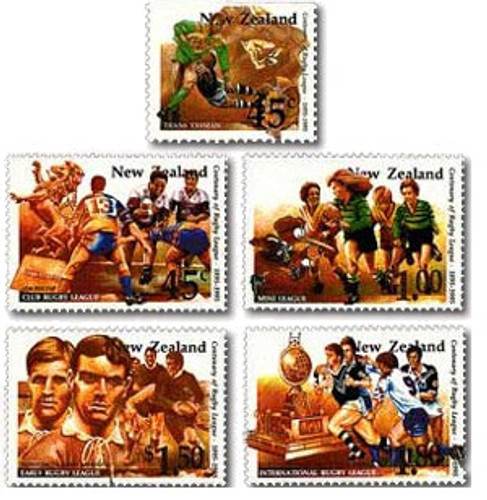 Rugby league, which turned 100 years old in 1995, had its origin in the industrial north of England however it has made most progress in its two Southern Hemisphere strongholds, New Zealand and Australia, where the competition attracts huge crowds and television audiences creating a frenzied atmosphere.

Rugby league had its beginnings in Huddersfield on 29 August 1895 when 22 rebellious Yorkshire and Lancashire rugby union clubs in England's industrial north held a meeting in Huddersfield and voted to quit the English Rugby Football Union (RFU) and form their own organisation (the Northern Union). Their dissatisfaction stemmed from the RFU's refusal to allow players to be compensated financially for taking time off work to play rugby. It was not long before a new brand of rugby developed. League was on its way. New rules emerged, speeding up the game and making it more open. Out went lineouts, play-the-ball restarts were introduced and, in 1906, teams were reduced from 15 to 13 players. League also became professional.

Rugby league in New Zealand grew out of the original rugby union All Blacks tour of Britain in 1905-6. Some of the touring New Zealanders watched the league, were impressed with the new game became converts.

One of these All Blacks, a fleet-footed winger named George Smith, returned home and quickly teamed up with keen young sportsman and budding entrepreneur Albert Baskerville, to form New Zealand's first rugby league side. Including many former All Blacks and dubbed the 'All Golds' because of its semi-professionalism, the team embarked on a tour of Britain in 1907-8 without having played a single game in New Zealand.

The tour was a success. The All Golds won 19 of  their 35 games including the test series against Great Britain which was won 2 - 1. On the way home the All Golds also captured two of three tests against Australia. On their return, the All Golds made up most of the two teams that squared off in what was the first league match ever held in this country. It took place in Wellington on 13 June 1908 before a crowd of around 7,000. The name All Golds has long been consigned to history but today's 'Kiwis' continue the tradition begun in the early 1900's.

Rugby league's development was gradual in New Zealand over the first half of the twentieth century. Since the 1960's however, it has made undoubted inroads into rugby union's dominance. Television helped generate interest inthe fast-paced, bruising game. Test matches involving the national Kiwis team started to draw large audiences in living rooms all over the country.

The popularity wave gathered force in the late 1980's when Australia's tough Winfield Cup competition and State of Origin series became regular television fare in this country. Then, in this centenary year, a New Zealand team, the Auckland Warriors, joined the expanded Australian competition, immediately lifting league in New Zealand to a higher plateau. A sellout crowd of 30,000 watched the Warriors' explosive debut match against the Brisbane Broncos at the Ericsson Stadium and it seemed the entire country saw the encounter on television. Although they are based in Auckaland, the Warriors do attract national attention.

All the hype and excitement at the high performance end of the sport is supported by a solid foundation. A domestic national club competition was launched in 1994, and growth at junior levels is constant.

The celebrations the marked rugby league's centenary climaxed in October 1995 with a 10 nation World Cup tournament in England and Wales.

New Zealand Post said 'Happy Hundreth' to the sport with this special issue of rugby league stamps. This set reflected the history, dynamism and widespread popularity of the sport that was created around the mines and mills of north England 100 years ago.

This booklet was only produced in a single hangsell format. Strips of five standard booklets were not available. The booklet was guillotined top and bottom rather than perforated, due to the booklet production process.

The miniature sheet, incorporating the $1.80 stamp, saluted rugby league's centenery with a fascinating montage of the sport's memorabilia. The stamp was surrounded by memorabilia of the game - jerseys, an old tasselled cap, photographs, old newspaper reports and programmes were all featured in this 'museum piece'. Also featured prominently was a view of Carlaw Park, in Auckland, historically and affectionatly regarded as the home of rugby league in New Zealand.

A special imperforate miniature sheet was produced for inclusion in a limited edition collectors pack. This sheet had the same design as the standard $1.80 miniature sheet.