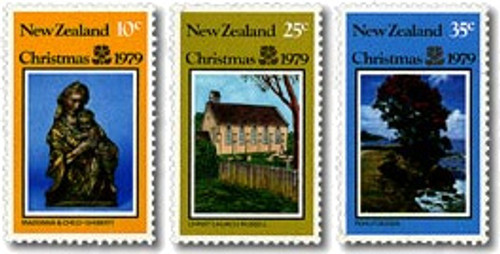 The 1979 Christmas Stamp Issue consisted of stamps depicting a sculpture of Madonna and Child, Christ Church in Russell and a Christmas Tree.

Christ Church, Russell - 25c
This Anglican church, the oldest surviving in New Zealand, was built in 1835 when Russell was known as Kororareka.  It survived the sacking of the settlement in 1845, but was badly damaged.  The building was restored by the New Zealand Historic Places Trust.

Christmas Tree - 35c
This stamp depicts a Pohutukawa tree (Metrosideros excelsa) in bloom along the Thames-Coromandel coast.  Sometimes known as the 'Christmas' tree, this is the best known of New Zealand coastal trees because of its attractive wide-spreading habit and the profusion of red flowers it bears about Christmas time.