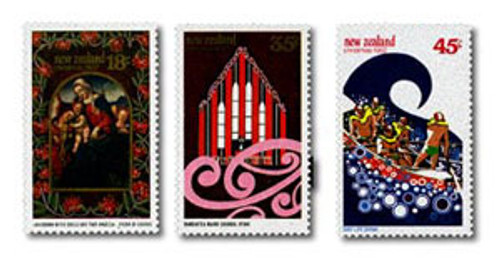 This year’s Christmas stamps again featured an ‘Old Master’, a religious scene, and a scene which typifies Christmas in the Southern Hemipshere.

The Madonna with Child and Two Angels by Piero di Cosimo is held in the Uffizi Gallery in Florence, Italy, and a reproduction of the painting featured on the 18 cent stamp. The Rangiātea Māori Church, Otaki was pictured on the 35 cent stamp and the 45 cent stamp depicted Surf Life-Saving. All three stamps were designed by Margaret Chapman (Christchurch, New Zealand) who also designed last year’s set.

The ‘Old Master’ stamp featured a border of pōhutukawa flowers which gave it the unique flavour of a New Zealand Christmas.
Di Cosimo took his name from his teacher, Cosimo Rosselli, another renaissance painter of the Florentine school. Piero Di Cosimo (1462 – 1521) was a contemporary of Michelangelo and Raphael, and his style was strongly influenced by them and by Leonardo da Vinci. Di Cosimo spent some time working on frescoes in the Sistine Chapel in Rome, and his style is characterised by imaginative and original interpretations of subjects with a penchant for detail.

The Rangiātea church features beautiful Māori art, which was given prominence in the 35 cent stamp design.
After a church was built at nearby Waikanae, the Māori Chief Te Rauparaha decided that the Ngāti Raukawa tribe should also have one at Otaki. In 1844, trees were cut down at Ohau, some of which were hauled down the coast, and others floated down streams. From Otaki beach the logs were taken to the site of Rangiātea. However, building did not begin until 1848, when Te Rauparaha returned from confinement in the north where he was detained as a result of the Māori Wars. That same year, Sam Williams came to Otaki, where he did valuable work until Sir George Grey persuaded him to establish Te Aute College in 1854.

By 1849 the church and community were flourishing. One early historian wrote “Every morning, as soon as the service is concluded, school commences, which is attended by almost the whole congregation, consisting of old and young, women and children. However, this enthusiasm did not last, perhaps because of the tragedy of the wars, or the later drastic drop in population”.
In March 1950, Rangiātea celebrated its centenary, a year earlier than had been planned because Bishop Bennett and Sir Apirana Ngata requested it, and both were dead within two months of each other later that year. Since 1901 the pastors have all been Māoris.

The Rangiātea church is still in use, and is famous as a lovely example of Māori art. The ridge pole is 26.213 metres long and the interior walls are alternative panels of wood slabs and weaving in the star seedling pattern. Three totara trunks support the ridge beam. The alter rails, the pulpit and the lectern are all beautifully carved and the sacred soil of Ra’iātea is buried under the sanctuary.

The inclusion of a stamp depicting surf life-saving recognised the important role this organisation plays in making the Christmas period in New Zealand safer.

About 8,000 people belonged to 69 surf life-saving clubs throughout New Zealand, and membership rapidly grew, with almost a thousand new cadets under 14 years old.

Surf life-saving began in Australia in 1907, and in New Zealand three years later as part of the Royal Life-Saving Society. In 1932, the Surf Life-Saving Association founded as a breakaway group, concentrating on beach rescues. In 1982, as the Association celebrated its Golden Jubilee, it could boast assets worth $8 million. With seven jetboats, 40 inflatable rubber boats, and a surf helicopter service operating from Auckland, its members service much of New Zealand’s coast. As a competitive body, the Surf Life-Saving Association ranks second only to Australia, and a women’s team had recently completed a tour of Great Britain.