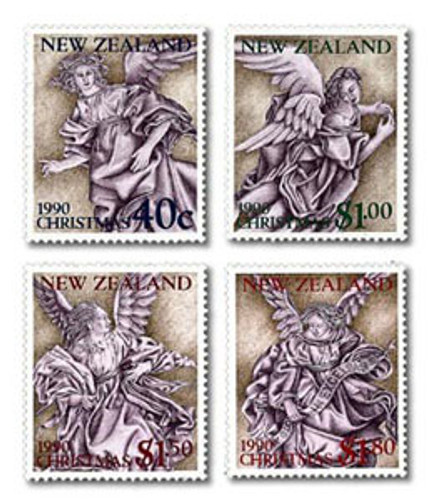 Historically, there has been a prominent association of angels with Christmas. Their religious significance, linked with their great form and beauty has for centuries made them an image of both worship and decoration.

Unlike many other religious symbols however, the angel transcends many beliefs.  In slightly differing forms, they appear in the religions of Hinduism, Buddhism, Taoism and Islam.  In the religions of western cultures they are usually pictured as glorious sexless beings, winged and dressed in flowing robes - usually white.  In eastern religions they appear as both men and women, while Hindu paintings and sculptures show them as definitely feminine.

In the angel hierarchy of Christianity, Archangel Michael leads two other classes of angel; the Seraphim (with six wings) and the Cherubim.  In any graphic or written historical documents, the Seraphim is usually seen to be hovering above God's throne, while the Cherubim appear alongside it.

The angel image has been sculpted, drawn, painted and modelled for many centuries.  Amongst the most famous artists inspired by angels were Botticelli, Raphael, da Vinci and William Blake, and many of the world's greatest art galleries bear testimony to their work.

Throughout the Bible, only three angels are mentioned by name - Archangel Michael, Gabriel the carrier of good news with his trumpet and Lucifer, the fallen angel who sinned against God.  In the Old Testament it is written that 10,000 angels appeared on Mt Sinai when Moses received 'The Law From God'.  And, according to the scriptures, it will be an angel who blows his trumpet on judgement day.