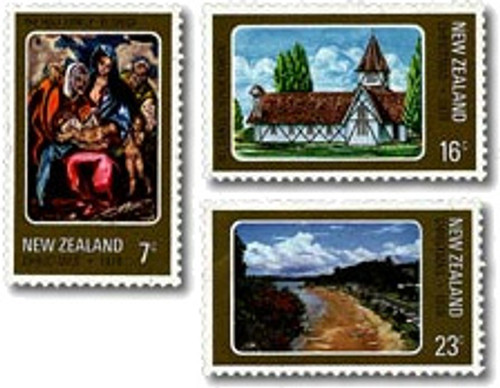 The 1978 Christmas Stamp Issue included an Old Master, the All Saints Church in Howick and a typical New Zealand beach scene.

Old Master - 'The Holy Family' by El Greco (1541-1614) - 7c
The original painting is in the Samuel H Kress Collection, National Gallery of Art, Washington DC, United States of America.  El Greco's life is shrouded in mystery.  He was a riddle to his contemporaries and remains so to those who study his work today.  He was a Greek, born in Crete.  When he was young, he learnt the painter's craft from monks and worked on icons.  Hope of greater things drew him to Italy, first to Venice where he studied the great masters of the day.  Later, at Rome and in Spain, he passed for a pupil of Titian.

All Saints Church, Howick - 16c
One of the first of the Selwyn Churches, this was built for the use of the Fencible settlement at Howick in 1847.  The church was designed by Frederick Thatcher and prefabricated at St John's College, Auckland.  The only significant alteration to the church has been the addition of a side aisle in 1862.  Some years ago a new church was built for the congregation, but it was decided at the same time to preserve the old All Saints.