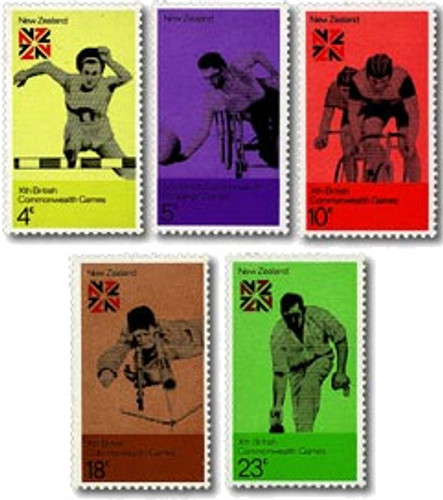 After the Amsterdam Olympic Games in 1928 a Canadian proposal for an 'Empire Games' was put before the representatives of the Empire countries. It was unanimously accepted and eleven countries took part in the first Empire Games in 1930 at Hamilton, Ontario, Canada.

It was decided that the games be held every four years.  Later, at Jamaica in 1966, it was agreed that the term 'Empire' should be dropped and the games should in the future be known as the 'British Commonwealth Games'.  In 1974, forty four years after the first games, over thirty countries and approximately 2000 athletes took part in the 10th British Commonwealth Games at Christchurch, New Zealand.  The first Paraplegic Commonwealth Games were held in Perth, Western Australia, in 1962.  In 1974 the 4th Paraplegic Games were held in Dunedin, New Zealand.  To commemorate these two sporting events in New Zealand in 1974 five stamps were issued.