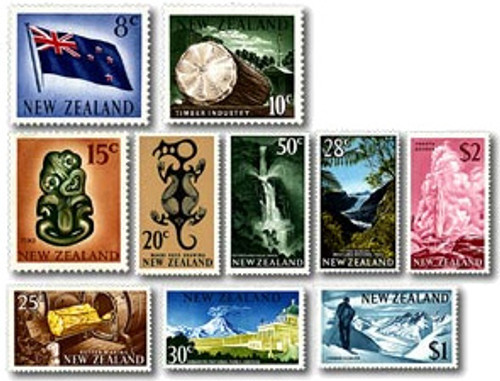 The planning of the 1967 Definitive set of stamps commenced as early as July 1964 but it was not until January 1966 that preliminary notice was given by the New Zealand Post Office that decimal currency stamps would be put on sale on 10 July 1967, the day when New Zealand would begin the conversion to decimal currency.

It was decided that as there was insufficient time to have a new set of pictorial stamps designed and printed, the design and colours of the existing 1960 Pictorial issue would be retained. Two additional stamps, with new designs, were added to the set in late 1967 (71/2c) and mid 1968 (28c) and two of the original designs were reissued in different colours in 1968 (15c and $2).

New Zealand Flag - 8c
New Zealand's national flag, a Blue Ensign bearing the four-star Southern Cross constellation was not adopted for general use until the gazetting of the Royal assent to the New Zealand Ensign Act on 12 June 1902.

Timber Industry - 10c
Although New Zealand was a heavily forested land when the first European settlers arrived, clearance of the land for pastures, deliberate and accidental burning, and the operations of timber mills threatened the extinction of the timber resources.  Fortunately, reforestation projects have given an assured future to the timber industry.  Both exotic and native timbers are being milled in large quantities for use within the country and for export. The design of the stamp was commissioned by the New Zealand Timber Merchant Federation.

Tiki - 15c
The greenstone hei-tiki was one of the commonest forms of neck pendant worn by Maori of high rank when Europeans first came to New Zealand.  Greenstone is an extremely hard material.

Taniwha - Maori Rock Drawing - 20c
Although Maori art of the period of first European contact had previously been featured in stamp design, this South Island rock drawing of a taniwha was the first archaeological subject chosen from Maori pre-history to be depicted on a New Zealand stamp when it appeared in 1960.  The drawings were executed in a limestone cave shelter which overlooks the south bank of the Opihi River in South Canterbury.  The taniwha is a mythical monster of Maori tradition, which was described as a gigantic man-eating reptile lurking in deep pools.

Butter Making - New Zealand Dairy Industry - 25c
A large slab of butter leaving a churn is depicted on this stamp.  At the time of issue of this stamp New Zealand manufactured around 220,000 tons of butter a year of which more than three-quarters of this quantity was exported, hence the importance then as now of dairy products to the country's economy.

Sunderland Falls - 50c
The Sunderland Falls, located in Fiordland National Park, drop from Lake Quill over a steep-walled mountain parapet of the upper Arthur Valley in three successive leaps - the topmost 248 metres, the middle 229 metres, and the lowest 103 metres.

Tasman Glacier - $1.00
Tasman Glacier, which is not only the largest glacier in New Zealand but also one of the largest in the temperate zone, is in the South Island's Mount Cook National Park.

Pohutu Geyser - $2.00
This stamp illustrates Pohutu Geyser at Whakarewarewa, near Rotorua.  Throwing boiling water to a height of over 21 metres, the geyser is one of many thermal wonders in the area.

Tiki - 15c
Amended colour, issued 19 March 1968.
Maori greenstone tiki - worn as a neck pendant.  The stamp design was the same as the original 15c 'Tiki' stamp but with a green background colour.  The Post Office considered that the original coloured version did not do justice to the stamp design.  With this issue Harrison and Sons began using a new stamp paper with a synthetic gum called polyvinyl alcohol (PVA) which was used on all their subsequent printings.

Pohutu Geyser - $2.00
Amended colour, issued 10 December 1968.
This stamp illustrates Pohutu Geyser at Whakarewarewa, near Rotorua.  Throwing boiling water to a height of over 21 metres, the geyser is one of many thermal wonders in the area. The design was the same as the original $2 stamp but the colours were more natural.

Brown Trout - 7 1/2c
New design issued 29 August 1967.
The brown trout thrives in New Zealand's inland rivers and streams, and provides sport for fishermen from all over the world. This stamp commemorated the 100th anniversary of its introduction to New Zealand waters.

Fox Glacier - 28c
New design issued 30 July 1968.
One of New Zealand's most magnificent scenic attractions, this "river of ice" is found in Westland National Park, in the South island.