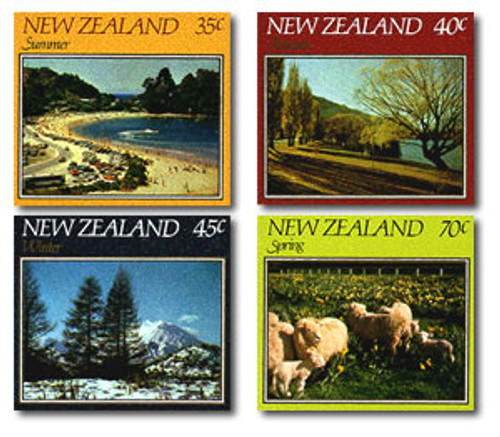 That New Zealand is a country of year-round beauty is amply illustrated by the four stamps forming this attractive Four Seasons Scenic stamp issue. The stamps each represent a facet of the New Zealand landscape at a particular time of the year. The winter and spring scenes are in the North Island and the summer and autumn scenes are from the South Island.

Nature's four seasons are featured on the stamps of the New Zealand 1982 Scenic stamp issue. There are two North Island and two South Island scenes.

The Summer scene shows Kaiteriteri beach. near Nelson, portrayed in deep blues and summer gold, with a burnt orange border. Kaiteriteri is a popular beach resort with motels, caravan parks and tourist flats. At the north end of the beach is Kaka Point, once a fortified Māori look out.

Autumn colours are beautifully represented in the illustration of St Omar Park, Queenstown, on the shores of Lake Wakatipu.  It seems approriate that the centre of the 1860's gold rush is shown in hues of gold, with deep green shadows. The border of the stamp is in a rich autumn red.

From lakes and beaches, the scene moves to the mountains for winter. The snow- capped Mount Ngauruhoe features in the Tongsriro National Park scene on the 45c stamp. This 2,291m mountain is the most continuously active of New Zealand's volcanoes, regularly belching steam and gas, and spectacularly erupting ash and lava every few years. The stamp, bordered in navy, is predominantly white and blue effectively conveying the chilly winter scene.

The final stamp of the set is, of cousre, Spring and its subject is a Wairarapa farm, just after lambing. Newborn lambs and their mothers graze among brightly coloured daffodils in a lush green pasture.

These four scenic stamps will play an important role in promoting New Zealand scenery as a tourist attraction. Together they represent four facets of the New Zealand landscape - the coasy, lakes, mountains and farmland and show that it is a country of year-round beauty.