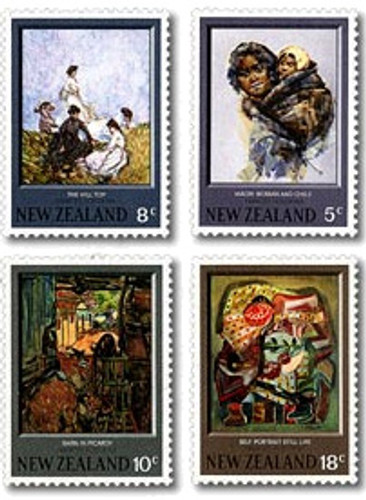 Born in Dunedin in 1869 Frances was encouraged to paint by her father.  She exhibited for the first time in Dunedin and Christchurch in 1890.  That same year she was elected a working member of the Otago Art Society.  Frances attended the Dunedin School of Art, subsequently gaining first class passes. During the period 1890 - 1900 she devoted most of her time to painting, exhibiting regularly.  In 1901 Frances left New Zealand to study and work in England and Europe although she returned home on several occasions to exhibit and to visit family.  She eventually settled permanently in England.  Frances Hodgkins died at Herrison House, Dorcester in 1947.  She was essentially an artist in the European tradition, and it is on her later work done in Europe that her reputation rests.

Maori Woman and Child - 5c
Painted in 1899-1900 this is considered to be a good example of Hodgkin's early work.  The painting is now displayed in the National Art Gallery, Wellington.

The Hill - 8c
Painted in 1908-1909 this shows the influence of the French painters of the period on Hodgkins.  The painting is now displayed in the National Art Gallery, Wellington.

Barn in Picardy - 10c
Painted in 1918 this is a good example of Hodgkin's work of this period.  The painting is now displayed in the Canterbury Society of Arts Gallery, Christchurch.

Self Portrait Still Life - 18c
The title refers to personal effects.  This work was painted in the near abstract style which Frances Hodgkins led British painters in developing and which became a characteristic of British painting for many years.  The painting is now displayed in the Auckland City Gallery, Auckland.