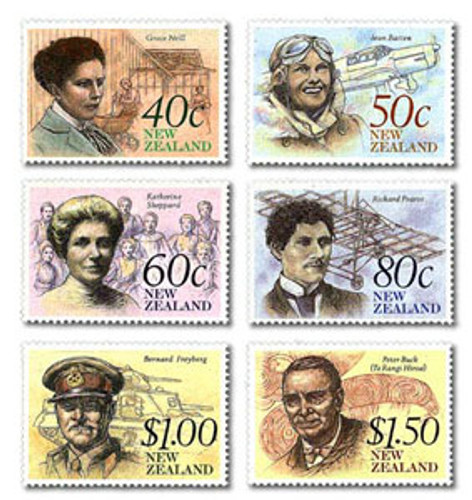 This issue titled "The Achievers" was another in the 'Heritage ' series of stamps leading up to the 1990 150th anniversary celebrations in New Zealand.

The Achievers is a very special stamp issue which salutes some of the people from our past whose achievements have gone largely unheralded by the rest of the world - yet to many New Zealanders they are legendary for their dedication and courage.

The six people chosen for this issue, three men and three women, were certainly achievers.  Grace Neill, Jean Batten, Katherine Sheppard, Richard Pearse, Bernard Freyberg and Peter Buck all left their mark on New Zealand in a variety of fields.  Neill and Sheppard are probably less well known today than the other four - both laboured for the advancement of women.  The others - Batten, the long distance flyer; Pearse, the pioneer designer and builder of aeroplanes who may have flown before the Wright Brothers; Freyberg, solider and Governor-General; and Buck, renowned anthropologist - remain household names.

1990 was a year of celebration for New Zealand.  And what better momento was there than this historic issue which salutes six New Zealanders who each had the vision, the courage and the dedication to leave their mark on New Zealand.

Product listing for Hertige - The Achievers