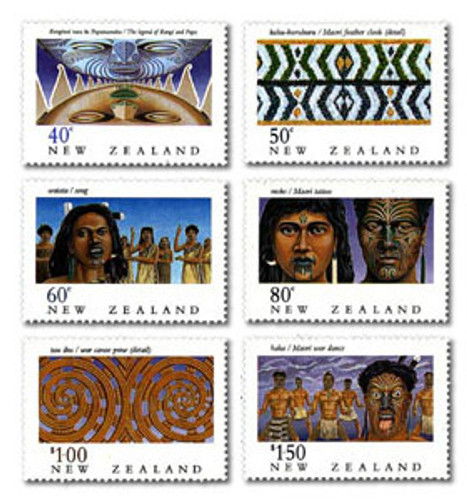 This sixth issue in the 'Heritage ' series of stamps commemorating New Zealand's 150th anniversary in 1990 honours the Tangata Whenua - the original people of the land.

Many hundreds of years ago, ancestors of the Maori are believed to have sailed from the west - to settle in the Pacific Islands of Fiji, Tonga, and Samoa.  A few hundred years later, their descendants settled the Marquesas and Cook Islands - what is now known as Hawaiki, or the homeland of the New Zealand Maori.  It was from here, around 800AD, that the first canoes ventured to Aotearoa.

As well as introducing the dog, the rat and edible plants to this land, these settlers also brought with them their Polynesian cultural heritage - which has developed over time to become the Maori culture as we know it today.

Product listing for Heritage - The People