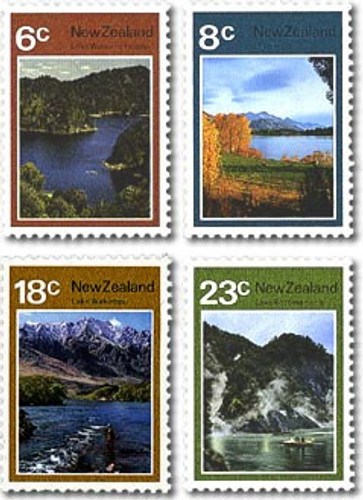 Lake Waikaremoana - 6c
Perhaps the most beautiful lake in the North Island, Lake Waikaremoana is situated near Wairoa, Hawke's Bay.  Its star shape and surroundings of forested mountains make it a breath-taking spectacle.

Lake Hayes - 8c
Situated in the heart of the Southern Lakes District not far from Queenstown.  A charming lake.  It was named for a Donald Hay who sought land in the area.  However, a theory persists that it was named after the notorious pirate Bully Hayes.

Lake Wakatipu - 18c
The longest of the lakes in the South Island's Southern Lakes District, Lake Wakatipu is noted for its scenic attributes.  It is shaped like an "S" and is of glacial origin.  With a length of 84 km and an area of 290 square km, it ranks second in size amongst the southern lakes.  The mountains in the background are the Remarkables.

Lake Rotomahana - 23c
A celebrated lake of the Rotorua District.  Lake Rotomahana is three square miles in area and occupies an extremely deep volcanic crater.  Originally it was much smaller in area and on its slopes were two of the most beautiful spectacles of this thermal area, the pink and white terraces.  Both terraces disappeared after the historic eruption of Mt Tarawera in 1886.  It was then that a new Lake Rotomahana came into being.