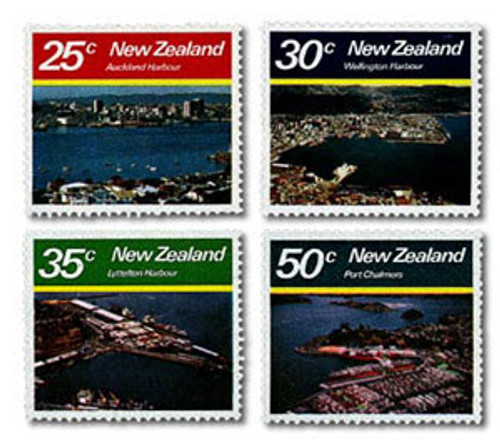 Auckland Harbour - 25c
The Port of Auckland is situated on the southern shore of the Waitemata harbour adjoining the commercial area of the city.  Because of the size of the industrial area it serves and its proximity to the rich farming lands of the Waikato, Auckland has become one of New Zealand's most important ports.

Wellington Harbour - 30c
Port Nicholson is a large natural harbour at the southern extremity of the North Island and on the north-eastern shore of Cook Strait.  The harbour is land-locked with an entrance of just over 1.6 kilometres from shore to shore and, being surrounded by hills over 390 metres high, it provides sheltered anchorage in a region where wind velocities may exceed 160 km/hour.  The depth of water over the great bulk of the harbour exceeds 10 fathoms.

Lyttelton Harbour - 35c
The Port of Lyttelton is the third port in New Zealand.  For exports it serves the great primary-producing plains of Canterbury Province.  The port is connected to the City of Christchurch by a road tunnel through the Port Hills.  The inner harbour is situated about 6.4 kilometres from the entrance and is formed by breakwaters.