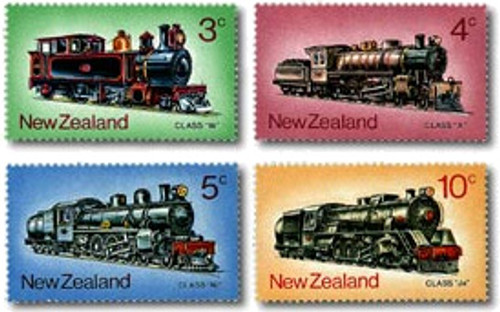 The last of the steam locomotives had been withdrawn in 1971 and replaced by diesel engines.

"W" Class Tank Locomotive - 3c
The "W" Class tank locomotive was the first engine built by the New Zealand Railways Workshops in 1889 and the particular engine depicted is held by the Railways for display.

"X" Class Locomotive - 4c
The "X" Class locomotives first built in 1908 were among the first four cylinder compound locomotives in the world.

"Ab" Class Locomotive - 5c
The "Ab" Class locomotive was for many years the Railways' maid of all work and between 1915 and 1926, 141 were built.  No. 608 "Passchendale" the locomotive depicted on the stamp was one of two engines of this class to carry a memorial plaque.

"Ja" Class Locomotive - 10c
The "Ja" was the last steam locomotive to be built by the New Zealand Railways and No. 1274 was the last of 35 of this class built.