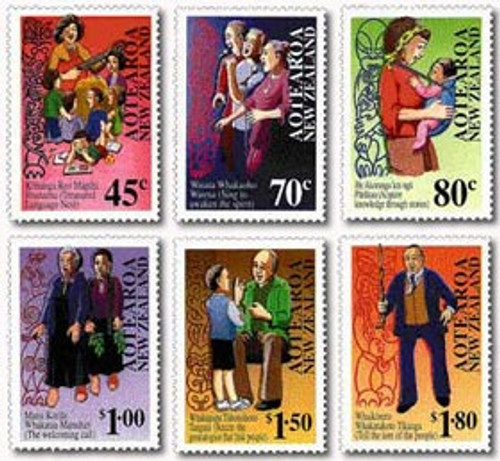 The Māori language came to New Zealand with the Polynesian migrations around 1,200 years ago. Since then, it has developed independently of other Polynesian tongues to become the Māori language of today. It is estimated that in 1995 some 50,000 New Zealanders, almost all of Māori descent, were fluent speakers of Māori and perhaps another 100,000 understood the language.

As Māori is not spoken widely anywhere else in the world, it has provided New Zealand with a unique language identity. For that reason, and for the important role it has to play as a positive social force in the Māori community, its survival is seen as vital. This was recognised with The Māori Language Act 1987, which declared it to be an official language of New Zealand. Another important step was taken in making 1995 Māori Language Year - Te Tau O Te Reo Māori.

A unique sheet was produced for inclusion in a special limited edition collectors pack. The sheet incorporated four strips of the six stamps and included a decorative border.