For many centuries flowers have been used to celebrate, commemorate and mourn our most significant events. As early as 2500 BCE Egyptians were creating elaborate floral displays for burials and processions. One of the oldest known uses of burial flowers was discovered in an Iraqi burial site that dates to 62,000 BCE. Her Royal Highness Queen Elizabeth II wore a Coronation dress embellished with embroidered flowers from each of the Commonwealth countries. In each of the examples mentioned, flowers were used to highlight the importance of a particular situation. Flowers are also often chosen for their associated meaning or, in the case of the Queen’s Coronation dress, to illustrate allegiance.

The symbolic meaning behind flowers are equally important when it comes to remembrance, conveying sentiment or celebratory events. Learning the language of flowers became a popular pastime during the 1800s for Victorians, who would often choose to give flowers as a way of conveying a message they couldn’t say in person. For example, a white carnation said ‘you’re adorable’ but a red carnation conveyed a flaming heart or passionate love. A white lily represented virginity, purity, and heavenliness, but an orange lily was a statement of hatred, and an orange marigold stood for grief or jealousy.

For the Victorians, the poppy stood for consolation or comfort in a time of grief. It therefore makes perfect sense that the poppy became a modern-day international symbol of remembrance in World War One. Here in Aotearoa New Zealand the poppy is strongly associated with the Royal New Zealand Returned and Services’ Association’s annual charity appeal, which was established 100 years ago. The act of buying and wearing a poppy has become a powerful way to show support for veterans and to remember those who have passed. 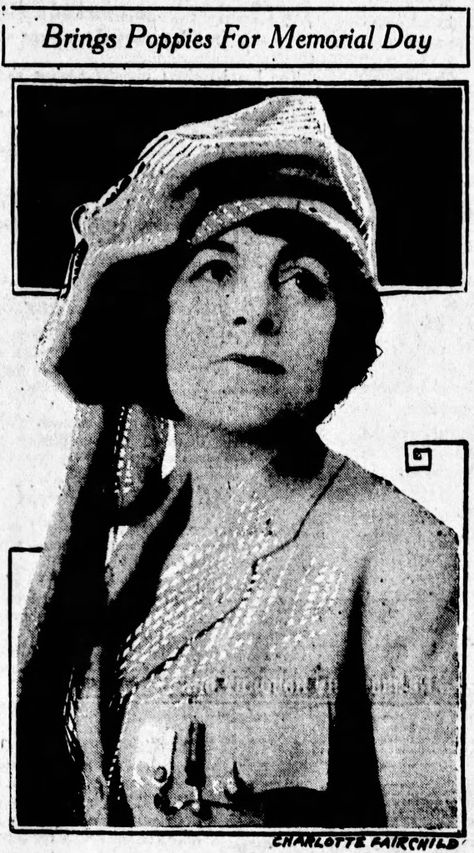 Madame Anna Guérin of France is credited with the idea of the remembrance poppy. Through selling fabricated poppies, Guérin raised funds for a charity to rebuild livelihoods in France after World War One. However, the poppy’s direct association with the war began earlier when it was noted that red poppies were one of the first flowers to grow in the mud and soil of the battlefields in Flanders. This was famously observed by Canadian Lieutenant Colonel John McCrae in his poem In Flanders Fields ('In Flanders Fields the poppies blow / Between the crosses row on row...'). 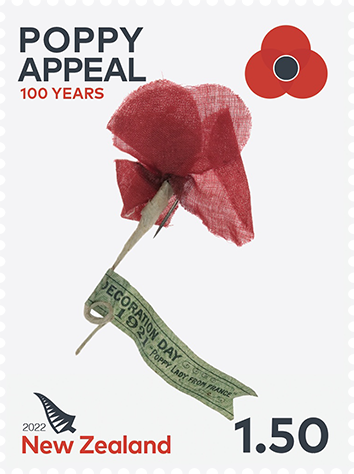 Stamp showing an example of the hand-made French fabric poppy made in 1921. This example from the Australian War Memorial Museum (REL39140), is made of cotton, paper and wax.

In 1921, the New Zealand Returned Soldiers' Association (RSA) placed an order for thousands of silk poppies made by the French Children's League. There was some debate within RSA circles on whether the poppies should be sold directly before Armistice Day in November 1921 or on Anzac Day in April 1922. The popular narrative is that, in the end, the poppies arrived too late to be sold for Remembrance Day, so they were sold in advance of Anzac Day instead. It was a huge success, with some of the profits being sent to the French Children’s League to help relieve suffering in the war-ravaged areas of northern France. The RSA used the remainder to assist needy, unemployed returned soldiers and their families. The tradition continues today, with the funds providing welfare services to war veterans and the returned services community. The RSA began producing its own poppies in 1931, with disabled former servicemen in Auckland and Christchurch making them. The shape was similar to the poppy in the $2.80 stamp (below) although was made of cloth rather than paper. This example is thought to have been made between 1960 – 1977. The current 'opened' or 'flat' paper design was adopted for Poppy Day in 1978.

The poppy on the $4.10 was used in 2015 when an emergency shipment of Australian poppies was sent to New Zealand because, owing to production problems in the Christchurch factory, a machine expected to produce up to 1.25 million poppies had only made about 800,000 in time for Anzac Day.

In an act of ANZAC solidarity, Australia agreed to provide the remaining required poppies at cost price.

During the COVID-19 lockdown in April 2020, people couldn’t attend a dawn service on Anzac Day. The Poppy Appeal was moved online, and people made their own poppies. The image of the knitted poppy on the $4.90 stamp is a good example of a home-made poppy, but a rich variety was made and displayed throughout the country. This example on the stamp is from the National Army Museum in Waiouru, where a large collection of similar poppies is on display.

This Anzac Day NZ Post is proud to celebrate the poppy in all its forms and everything it has meant to New Zealanders for 100 years.