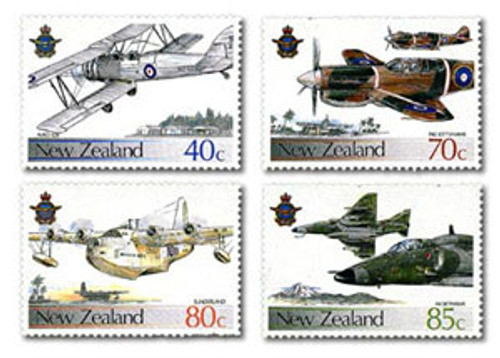 The military first considered the question of aviation in regard to the defence of New Zealand back in 1911 but it was not until 1 April 1937 that the Royal New Zealand Airforce emerged as a separate service. Until then it had been controlled and administered as part of the Army.

Between 1945 and 1987 there have been many airforce operations undertaken requiring skilled airmen.  RNZAF squadrons and aircrew served in hot spots from the Berlin Airlift, Malaya and Cyprus to Vietnam and the Sinai with aircraft as diverse as Vampires, Canberras, Broncos, Dakotas, Bristols, Hercules and helicopters.  The service has also flown transport missions round the globe from the Antarctic to Bangladesh and to Moscow and China.

The RNZAF's maritime unit, No 5 squadron, was based for many years in Fiji, flying patrols and mercy missions throughout the South Pacific until the squadron's reliable old Sunderland flying boats were replaced with landbased Orions. The RNZAF has operational squadrons and operational flights involved in strike, maritime patrol, transport (including helicopter) and training roles.

This New Zealand Military History stamp series coincided with the 50th Anniversary of The Royal New Zealand Air Force.  The issue depicted four of the aircraft flown by the RNZAF from its formation to the present day.

Miniature Sheet - $2.75
The miniature sheet for this issue was also produced with a 'Capex'87' overprint to mark New Zealand Post's attendance at the Capex'86 World Philatelic Exhibition in Toronto, Canada.