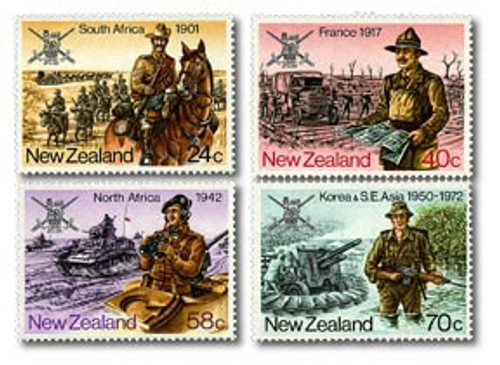 In the years immediately following the signing of the Treaty of Waitangi on 6 February 1840, friction between the settlers and the Maori people built up over land claims and came to a violent head in 1844. It was then that North Auckland Maori Chief Hone Heke led a well-armed force to Kororareka, now called Russell, in the Bay of Islands. The township was sacked, and general alarm at this rebellion led to the passing of the first Militia Ordinance in 1845. Under this Ordinance, all able-bodied men aged between 18 and 65 were required to hold themselves in readiness for service and for 28 days training every year.

After the New Zealand Land Wars broke out in 1860 the Government decided that the establishment of local forces to supplement Imperial troops stationed in the country would help develop the country's 'self reliant' policy - the first Regular Force was formed in 1862 - the New Zealand Army was born.  In 1870 the last British regiment left New Zealand shores.

Since World War II, New Zealand soldiers have seen action in Korea, Malaysia and South Vietnam.  For all the soldiers of New Zealand's many military campaigns, the Army has a very special meaning: bad times and grim memories tend to fade into the background as they remember the good times and the comradeship.

In memory of those who did not return from war, the New Zealand Army opened a museum, to record how the country's military history has contributed to both the development of New Zealand and its national heritage.  The museum is outside the Waiouru township in the central North Island and was opened in October 1978.

The stamps in this issue depict some of the important military campaigns in which the New Zealand Army has fought.

The miniature sheet incorporates the four stamps from this issue set against a background illustration of a military camp set in the New Zealand bush in the 1860s.  After the New Zealand Wars broke out in 1860 the Government decided that the establishment of local forces would assist in the development of the country's 'self reliant' policy and the first Regular Force was formed in 1862 - the New Zealand Army was born.  In 1870 the last British regiment left New Zealand shores.

The Hobbit: The Battle of the Five Armies Set of Maximum Cards

The Hobbit: The Battle of the Five Armies Presentation Pack

The Hobbit: The Battle of the Five Armies Brilliant Uncirculated Coin