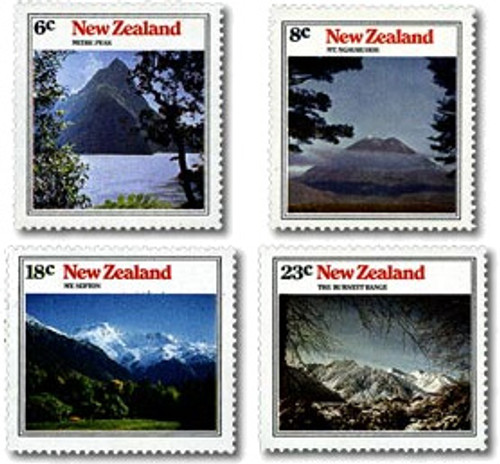 Mitre Peak - 6c
The peak was named for its resemblance to the shape of the bishop's mitre or head-dress in 1851.  Mitre Peak, rising 1,695 metres above the waters of Milford Sound, presents its most striking face to the guests at the Milford Hotel from where the picture featured is taken.  Closer inspection of the peak reveals its myriad waterfalls fed by the high rainfall in the area.

Mt Ngauruhoe - 8c
Mt Ngauruhoe, most active of New Zealand's volcanoes rises 2,286 metres in the snow playground of Tongariro National Park in the centre of the North Island.  Together with Mt Tongariro and Mt Ruapehu it stands sentinel over the forestry centre and water playground of Lake Taupo.

Mt Sefton - 18c
The ice-encrusted precipices of Mt Sefton named by Maori Maunga Atua - Mountain of the Gods - rise 2,134 metres to its 3,155 metres summit.  When viewed from the South Island tourist resort of The Hermitage the view of Mt Sefton surpasses that of Mt Cook.  Mt Sefton is noted for its avalanches.

Burnett Range - 23c
The Burnett Range lies between the Tasman and Jollie Rivers in the foothills of New Zealand's Southern Alps and is visible from the Mt Cook tourist resort, The Hermitage.