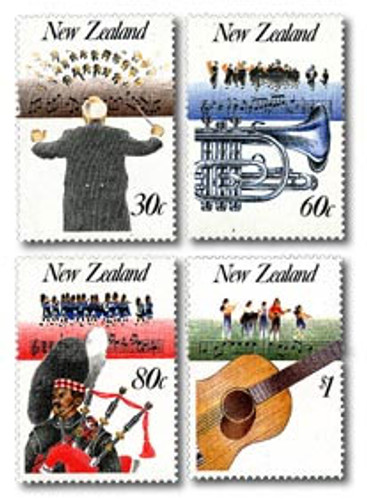 Four types of music groups which are enjoyed throughout New Zealand are shown on this issue.

The first New Zealnd brass band is believed to have been that of the Taranaki Volunteer Rifles, formed at New Plymouth on 14 March 1859. For many years almost every township possessed its band, a symbol of civic pride.

The Caledonian Pipe Band of Southland formed at Invercargill in 1896 was the first pipe band formed in New Zealand.  Many towns and cities and some secondary schools still have their own pipe bands, which complete through the New Zealand Highland Pipe Bands Association.

2020 Ross Dependency: Seasons of Scott Base Set of Used Stamps