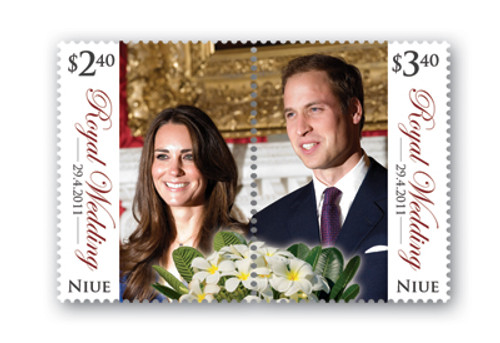 As a proud Commonwealth nation, Niue is excited to celebrate the upcoming Royal wedding of His Royal Highness Prince William of Wales KG and Miss Catherine Middleton with its latest stamp issue.

The highly anticipated Royal wedding will take place on 29 April 2011 and will be watched by millions of wellwishers around the world.

The ceremony will be held at Westminster Abbey - chosen by the couple for its staggering beauty and 1000-year-old Royal history. It will no doubt be a day of tradition and extravagance, but most importantly a day of celebration.

Heads of state from around the world will be in attendance, as well as members of the British Royal family, and of course close friends and relatives. As the couple walk down the aisle as husband and wife, they’ll be embarking upon a journey of Royal proportions.

A portrait of happiness

The wedding is the culmination of a courtship that had its beginnings in 2001, when William and Catherine met at the University of St Andrews in Scotland. Since then, they have become one of the world’s most-watched couples, and are a picture of elegance and charm. The se-tenant set consists of a $2.40 stamp and a $3.40 stamp. Together the stamps capture the Royal couple as we so often see them - graceful, composed and very much in love.

The stamps also feature imagery of the frangipani (siale) flower, and are a beautiful link between Niue and its allegiance to the Crown. Order yours today as a special memento of this globally significant event.

Commemorate the wedding of the year

The union between Prince William of Wales and Catherine Middleton will be remembered and talked about for years to come, and is deserving of these stunning collectable products.