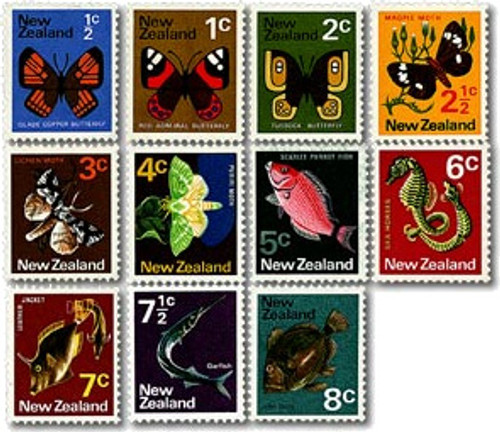 As a result of postage rate increase in 1971 the  2 1/2c stamp was no longer required.  To use up stocks of this value (in excess of 37 million stamps)  they were overprinted with a 4c denomination. Three varieties exist: Harrison and Sons overprinted those stamps that had not yet been perforated by photogravure (issued July 1971) and by letterpress process those that had been perforated and trimmed into single sheets. A third overprinting was completed in 1973 by the New Zealand Government Printer using the letterpress process.

Glade Copper Butterfly (Lycaena feredayi) - 1/2c
This native insect is common in wasteland areas throughout the country during the summer.  The larva which often hibernates in winter, feeds on muehlenbeckia vine.

Red Admiral Butterfly (Pyrameis gonerilla) - 1c
Found during summer, this striking insect, which has the Maori name kahukura, is not often caught without a net as it is a powerful flyer.  During the immature stages of its development the butterfly lives in the stinging nettle plant.

Tussock Butterfly (Three varieties exist: Argyrophenga antipodum, A. harrisi and A. janitae) - 2c
The female variety of this butterfly has a paler colouring than the male and both are found only in the tussock country of the South Island.

Magpie Moth (Nyctemera annulata) - 2 1/2c
One of the few day-flying moths of New Zealand, this species is often mistaken for a butterfly.  Its sharply contrasted colours warn birds of its apparent unpleasant taste.  As a grub it feeds on Cineraria and related plants.

Puriri Moth (Hepialus virescens) - 4c
Confined to the North Island, the larva of this insect feeds on the wood of wineberry, manuka, kamahi, puriri and several other trees.  Females sometimes have a 15cm wingspan.

Scarlet Parrot Fish (Pseudolabrus coccineus) - 5c
Issued 4 November 1970.  Abundant south of the Bay of Plenty this fish feeds on a wide variety of marine animals.  Its original name 'soldierfish' was given to it by Captain Cook during his exploration of New Zealand.

Seahorses (Hippocampus abdominalis) - 6c
Issued  4 November 1970.  Seahorses are found in various forms around the world in warmer water.  They grows to about 12.5cm in length and are often found among seaweeds, which they use as camouflage.

Leather Jacket (Novodon convexirostris) - 7c
Issued  4 November 1970.  Found in all coastal areas about rock and weed, this fish is easily recognised by its shape and the single spine above the eye.  Its food is any small animals, many being removed from rock by means of it's sharp teeth.

Garfish (Reporhamphus ihi) - 7 1/2c
Issued  4 November 1970.  Sometimes known as piper, this fish is found in all coastal areas often near the surface.  It is common in shallow bays where seagrass occurs.  It feeds on a variety of small animals and some seaweeds.  It is easily recognised by its very long beak-like lower jaw.

John Dory (Zeus japonicus) - 8c
Issued  4 November 1970.  The dark spots on the sides are said in Europe to represent the finger marks of St Peter.  John Dory is largely confined to North Island waters.  The colour and shape are distinctive.