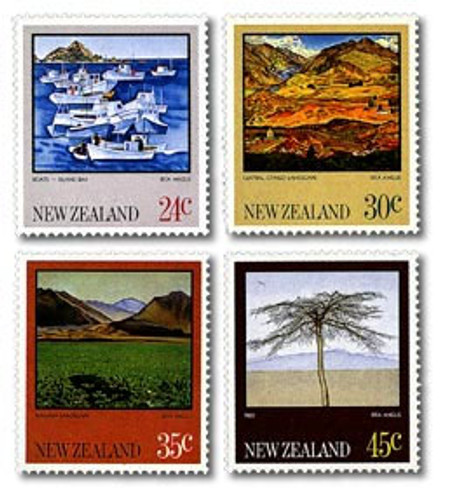 This issue of stamps featured the works of Rita Angus whose meticulous compositions in oil and water-colours earned her the reputation as a leader of the modern school of New Zealand painting.

Rita Angus, born in Hastings, and received her early arts skills training at Palmerston North before moving to Christchurch where she attended Diploma classes at the Canterbury School of Arts from 1927-1931. She lived in Christchurch until 1954 when she moved northwards to settle in Wellington, leaving it for one year in 1958 to study and work in Europe. Throughout her career she made frequent painting trips throughout New Zealand, especially to Central Otago and Hawke's Bay.

In the early part of her career she often depicted aspects of Wanaka, a region of particularly serene beauty in New Zealand's South Island. It has been suggested that she turned to watercolour during the war years because paintings in that medium were more saleable when people had less money and also because of a shortage of imported artists materials, but the fact is that the artist was equally at home with both watercolours and oils using them alternatively until the end of her career.

Rita Angus died in 1970 at the age of 62 years following a lifetime devoted to art. In a newspaper obituary Mr Melvin Day, the Director of the National Art Gallery, stated "Her influence on painting in this country was wholly beneficial, not only because of her achievement in art, but above all for her artistic integrity and independence". But perhaps the last word should be left to the artist. In the Year Book of the Arts, 1947, Rita said her aim was "to show to the present a peaceful way, and through devotion to visual art to sow some seed for possble maturity in later generations."

This stamp issue featured four stamps with her artwork and the issue coincided with the first major touring exhibition of works by the artist, which was organised by the National Art Gallery in Wellington. The four paintings chosen to feature on the stamps came from different stages of the artist's career, spanning forty years, in the medium of watercolours and oils. A presentation pack was also issued on 27 April and featured the four stamps. The pack was done in a vertical format, which comformed to the stamp issue. A self-portrait of Rita Angus featured on the front cover.