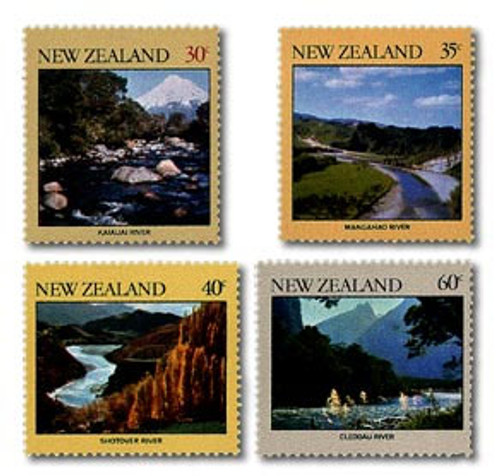 Four New Zealand rivers featured in the 1981 Scenic Stamp Issue. There are two from the North Island - the Kaiauai and the Mangahao - while the Shotover and the Cleddau are from the South Island.

Kaiauai River - 30c
The Kaiauai is one of the many streams radiating from Mt Egmont /Taranaki, featured in the background of this stamp.  The actual source of the Kaiauai is between Egmont and one of the two secondary volcanoes, now appearing as much eroded remnants, which form a shoulder on Egmont's northern slopes.

Mangahao River - 35c
Like most large New Zealand rivers and streams, the Mangahao is stocked with trout.  The river rises in the Tararua mountain range, flows down the eastern side of the mountains, then flows north-eastward through farmland into a major North Island river, the Manawatu.  Mangahou and not Mangahao is the correct Maori name for this river.  Many pioneers found difficulty with the pronunciation of Maori place names and in time corrupted pronunciation such as this passed into written form and common usage.

Shotover River - 40c
This stamp depicts the Shotover River flowing south between the Coronet Range (at rear left) and Brown Peak (rear centre) in the Otago Province.  Although unsuitable for fishing, the river attracted thousands of people in the 1860s when gold fever struck.  The Shotover was to yield some fabulous returns, and a tributary of the Shotover, Skippers Creek, became known as the richest creek in the world.

Cleddau River - 60c
Over several mountain ranges to the west of the Shotover lies the Cleddau River which flows north-westward into Milford Sound.  The area is well known for its breathtaking alpine and fiord scenery, attracting tourists from all over the world.