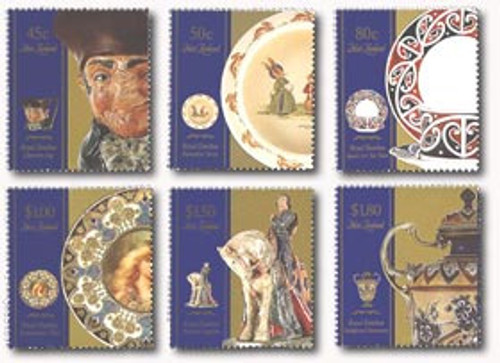 Six exquisite stamps and a spectacular miniature sheet were released to commemorate the 1992-93 CourierPost Royal Doulton Ceramics Exhibition - the first major Royal Doulton exhibition ever held in New Zealand. Significantly, 80% of the more than 750 pieces in the Exhibition came from family collections within the country itself. Royal Doulton enthusiasts are plentiful in New Zealand. In fact, there would be few homes that would not have at least one Doulton piece in use, or on display in a china cabinet or mantelpiece.

In 1815, the year of Waterloo, John Doulton invested his life savings of 100 pounds in a small riverside pottery in Lambeth, South London. The pottery made plain, everyday stoneware items such as candle sticks, and bottles for ink, beer and blacking. When John’s son Henry joined the firm, things changed. Henry brought with him a dynamism and entrepreneurial flair which transformed the fortunes of the little known pottery and made the Doulton name famous throughout the world.

Henry’s first great success was in recognising the revolutionary shift towards new standards of sanitation. In 1846 his Lambeth factory became the first in the world to produce stoneware drainpipes, conduits and related wares. In the 1860’s he turned his attention to Art Pottery. Students from the Lambeth School of Art were employed to design and decorate stoneware vases and other decorative items for the home. By the 1880’s the studio employed over 2490 women and 20 men to paint and model its wares. Cooperation on this scale between art and industry had never been seen before.

Doulton artists were exceptionally innovative and produced an unprecedented variety of saltglazed stoneware. With the purchase of the Burslem pottery in Staffordshire the firm continued to expand both its range and techniques in earthenware and bone china. Henry was eventually knighted and, in 1901, the firm was granted a Royal Warrant. Today Royal Doulton continues to produce an enormous range of high quality items from bathroom fittings, to table and nurseryware, to highly prized figurines and character jugs.