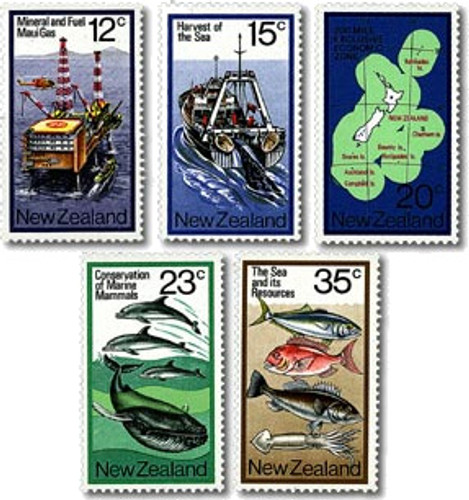 Within New Zealand there is keen interest in the extent of the sea's resources and how they can be used. This set of stamps focused on the sea and its resources.

Mineral and Fuel - Maui Gas - 12c
This stamp features the Maui gas drilling platform situated 53 km off the Taranaki Coast.  The gas field over which it stands was discovered in 1969 and is among the 20 largest in the world.

Harvest of the Sea - 15c
Harvesting the produce of the sea has always been an expensive business.  Modern fishermen operate craft with sophisticated equipment such as the trawler depicted.  This kind of vessel represents a large financial investment.

Conservation of Marine Mammals - 23c
With the gradual increase in the number of whales, the Government considered a marine mammal protection act under which it would be able to protect marine mammals within the economic zone.  Research continues into mammal species about which little is known. Dolphins and a whale are depicted on the stamp.

Fish species - 35c
Some of the more common fish taken commercially by the fishing industry and found in New Zealand waters are featured on this stamp - kingfish, snapper, groper and squid.