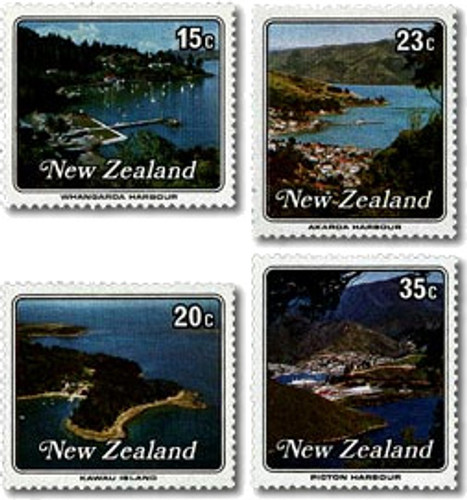 Whangaroa ('Long Harbour') between Maungonui and the Bay of Islands, on the eastern coast of Northland, is a spacious and perfectly land-locked anchorage the result of a drowned river system. The narrow rock-walled entrance, scarcely a third of a mile across, is cut in hard volcanic breccia, while the upper reaches, over 2 miles in width and surrounded by gently undulating country, have been eroded in soft sedimentary shales and sandstones.  Whangaroa is chiefly known as a base for deep-sea game fishing.

Bon Accord Harbour, Kawau Island - 20c
The scene depicted on the stamp is of Mansion Bay located in Bon Accord Harbour.  Kawau Island, whose name stems from the many shag colonies there, lies just off shore in the Hauraki Gulf, due east of Warkworth and 30 miles north of Auckland City.  Approximately 5 miles long and 3 miles wide, the island is almost split in two by Bon Accord Harbour, which opens towards the mainland, so forming a fine natural anchorage.

Akaroa Harbour - 23c
Situated at the south east end of Banks Peninsula is a busy fishing centre, both commercially and for pleasure.  The harbour is a little over a mile wide at the entrance, and runs inland for a distance of a little over 10 miles, opening into various bays at its upper end.  In the 1800s the harbour was the usual resort of whalers frequenting the seas about the Peninsula.

Picton Harbour - 35c
Situated in an inlet of Queen Charlotte Sound is the main port of Marlborough and is the South Island terminal of the inter-island rail-car ferry.  Terminal facilities established at the port came into operation in August 1962 and provide berthage for the ships maintaining a ferry service between Picton and Wellington for railway rolling stock, motor vehicles, and passengers.