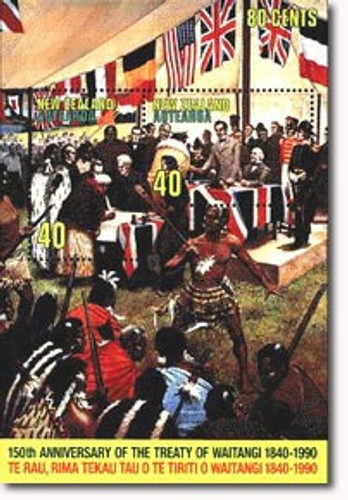 On 5 February 1840, the sheltered waters of the Bay of Islands witnessed a dramatic gathering of Maori canoes, tall ships and settlers boats. On shore, in a flag-draped marquee made from ships' sails, an important meeting began at 10.00am.

Leading Maori Chiefs, Lieutenant Governor William Hobson and a collection of both Maori and Pakeha advisers and onlookers gathered for a meeting that would seek the Maori leaders' "free and intelligent consent" delivering the sovereignty of the land to the British Crown.  A lengthy debate took place in the marquee.

On the next day, 46 head chiefs and Hobson signed what we now know as the 'Treaty of Waitangi'.  Eventually, some 500 signatures were gathered - yet chiefs of some important tribes never signed.  This milestone in our history was commemorated by a special miniature sheet.

The Treaty of Waitangi is perhaps the most important single document in New Zealand's history.

The miniature sheet of two 40 cent stamps (not issued separately) features a modern reconstruction of the Treaty-signing ceremony at Waitangi on 6 February 1840.  It depicts an original water colour painting by Len Mitchell, father of the miniature sheet designer.

Product listing for Treaty of Waitangi