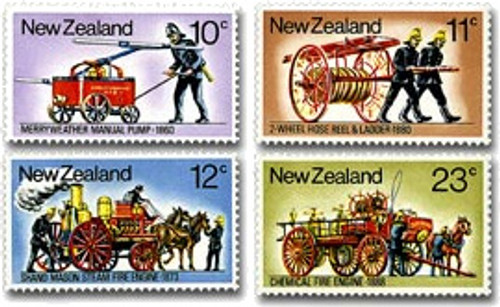 Merryweather Manual Pump - 1860 - 10c
Manual fire engines were used in the early years by most New Zealand Fire Brigades.  They varied from small units like the one illustrated on this stamp to larger vehicles which were horse drawn.  The pump was operated by a number of men working the handles up and down enabling an effective jet of water to be thrown to a considerable height.  The unit depicted, manufactured in London by Messrs Merryweather & Sons, is of metal construction, and equipped with a double-cylinder force pump.

Two - Wheel Hose Reel and Ladder - 1880 - 11c
This type of fire-fighting appliance was used extensively throughout New Zealand from the late 1860's to the 1900's. Equipped to carry a quantity of hose coiled on an independent inner reel, plus other ancillary equipment such as branches, nozzles, stand-pipes and ladders.  In early years they were drawn manually, but as more modern appliances became available they were towed by 'steamers' and later, by motorised equipment.

Shand Mason Steam Fire Engine - 1873 - 12c
The horse-drawn 'steamer' was a spectacular sight in many places from the 1870s until superseded by the petrol driven motor fire engine.  Even so, they remained the major pumping units in a great number of provincial towns throughout the country for many more years.

Chemical Fire Engine - 1888 - 23c
Although extensively used overseas, horse-drawn 'chemicals' were employed only in small numbers.  With the introduction of motor transport, they became a standard first-aid unit throughout the country.  The vehicle shown housed two 70 gallon copper cylinders filled with a mixture of sodium bicarbonate and water.  A small receptacle in the head of each cylinder contained sulphuric acid, which, when released into the water solution, caused a chemical reaction, and the water was expelled under pressure by carbon dioxide gas.