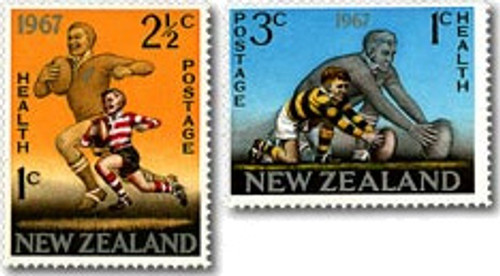 It was decided to introduce a sports theme with the 1967 Health stamp issue and as 1967 marked the 75th anniversary of the New Zealand Rugby Football Union, it was considered appropriate to depict Rugby football on the two stamps.

Each design featured a boy playing rugby football with a shadow figure of an 'All Black' player in the background. Due to decimal currency becoming effective in July 1967, for the first time the Health stamps appeared with the new currency. The proceeds of the 'Health' value of health stamps were donated to the Children's Health Camps movement.