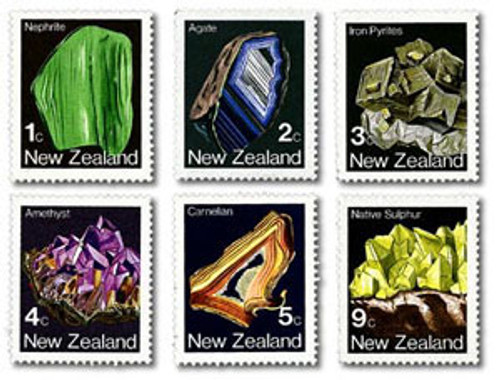 Nephrite which featured on the 1c stamp, is one of two minerals commonly recognised as jade. Its name originates form the Greek word "nephros" meaning kidney, and people suffering from kidney disease often wore nephrite as a healing charm. For over 2000 years nephrite was mined in the Sinkiang province of China and worked by master craftsmen into pieces of exquisite art. Māori also prize "pounamu" or greenstone as it is also known in New Zealand and it is called a taonga - a treasue. It was used historically for tools, weapons and amulets and also as a healing stone and is still used today, mainly as ceremonial weapons, amulets and as a healing stone. Deposits of nephrite also occur in Siberia, British Columbia, Alaska and South Australia. In New Zealand it is found mainly on the West Coast of the South Island between Hokitika and Greynmouth, but also exists in beach deposits further north.

Agate featured on the 2c stamp, is a variety of mineral quartz, and belongs to the largest class of minerals, the silicates. Agates have been used for thousands of years, not only for ornaments and vessels, but for all sorts of amulets. These minerals were held in high regard by the Greeks and Romans and were often reserved for people of high class. Agates are widely used in modern times for jewellery and ornaments. Agates are found all over the world, with large deposits in Brazil and Mexico. In New Zealand they are widely distributed but occur mainly in Northland, the Coromandel Peninsula, Canterbury and North Otago.

Iron pyrites which featured on the 3c stamp, is commonly known as "fool's gold", and is the most common sulphide mineral. The name is derived from the Greek word "pyr" meaning fire, because of the sparks it gives off when broken. Greeks wore pyrite as amulets because they believed they had healing powers, and this persisted until Middle Ages. Today iron pyrites are usually mined for their sulphur content which accounts for forty percent of the world's sulphur. By-products of this process are iron, and sometimes gold and copper. "Fool's gold" is found in Spain, Canada, United States of America, Italy, Greece and Sweden. In New Zealand it is found in Hauraki, Westland, Nelson and Canterbury.

Amethyst which was featured on the 4c stamp, has long been prized for jewellery and decorations, and was once worn as an amulet to remedy drunkeness. The name is derived from the word "amethystos" which means unintoxicating. Most high quality amethyst comes from Brazil, Uruguay, Mexico or Madagascar. In New Zealand good quality amethyst comes from the Coromandel Peninsula, Rakaia Gorge and Mount Somers.

Carnelian is also a type of mineral quarz and featured on the 5c stamp. It has also been used for thousand's of years for ornaments, vessels and also amulets. Carnelians are found all over the world and in New Zealand they are found in the Coromandel Peninsula, Canterbury and North Otago.

Native sulphur featured on the 9c stamp and is the chief source of the element sulphur and in ancient times it was known as brimstone, or the stone that burns, because it was highly combustible. Sulphur is commonly associated with volcanic activity, but today most of the world's sulphur comes from Louisiana and Texas where it occurs in beds on top of salt domes. Recovery from these deposits is by the Frasch process which was developed by Herman Frasch in 1894. Superheated water and compressed air are forced down pipes into the deposit, the sulphur melts and then comes to the surface. The main use is in the making of sulphuric acid for industrial purposes. The finest specimens of sulphur are found in mines in Sicily which have produced the mineral since 1250 A.D. It also occurs in Chile and japan. Sulphur was first mined in New Zealand on White Island in 1885. It is also found on Whale Island and in the Rotorua district, with the largest known deposit at  Lake Rotokaua, 9 miles north-east of Taupo.