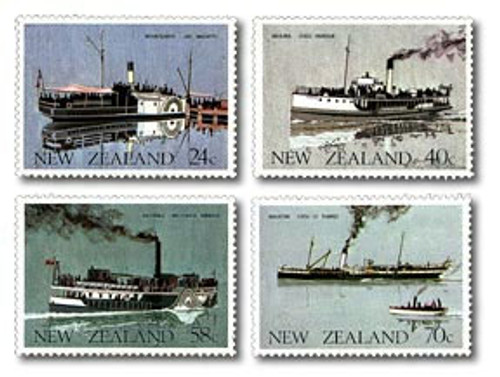 Travel in New Zealand's early days always posed problems. Roads were few and far between and overland tracks were fraught with hazards. The rugged terrain meant important harbours were separated by impassable barriers, while the density of the bush made the formation of more and better roads something for the future.

Water travel came easily to the early pioneers. But sailing craft were slow and uncertain. During the early 1840s, passengers, mail and cargo were consistently delayed and lives were being lost. The advent of steam in the mid-1800s made water communication swift, regular, feasible and safe. The first truly successful application of mechanical power was the paddle wheel. The splash and patter of the paddles was soon to be seen and heard around New Zealand coasts, harbours, lakes and rivers. Progress has meant the paddle steamer has been superseded, both on the water and by land transport, except for the occasional preserved pleasure craft.

This striking issue recalls the contribution made by passenger ferries to the development of parts of New Zealand. Consisting of four stamps, the set features two ferries which served gold mining settlements and two commuter ferries which operated on city harbours.