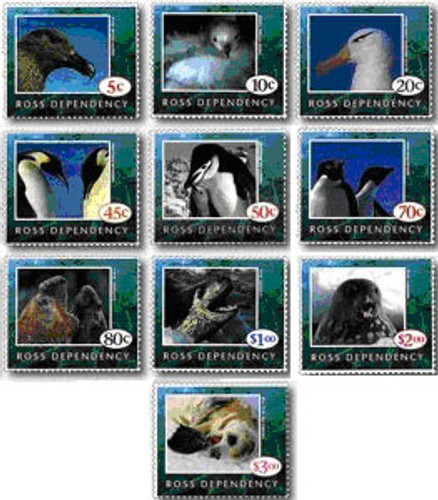 South Polar Skua - 5c
Compared with the strikingly dapper penguins in their almost formal black and white attire, the skua is a rather drab individual. Food gathering under the harsh conditions of the Ross Dependency region is never easy and the skuas are rather poor predators. They are known to attack defenceless penguin chicks in rookeries but the skuas have difficulty in ingesting the flesh and are more likely to feed from the penguin eggs.

Snow Petrel Chick - 10c
These chicks have a life of travelling ahead of them. They are bred in the Antarctic summer and when fully grown find that they must leave the region over winter. Though only of medium size they have impressive endurance capabilities. Banded birds have been found in Japan and on the North American and Alaskan coasts. Feeding on plankton and surface squid the snow petrels live from 20 to 30 years, taking that long flight each year and returning with uncanny accuracy to the same nesting site to mate each spring.

Black-Browed Albatross - 20c
The effortless gliding, diving manner of flight of the black-browed albatross is called "dynamic soaring" and is achieved with little apparent wing movement. With long narrow wings, evolved for energy-saving flight, they fly into the wind, gaining height then, when almost stopped in mid-air, they turn and dive to sea level at high speed before repeating the same procedure. The characteristic of the breeding style is to nest in serried rows, one chick in each nest. Chicks are fed on fish, squid and crustaceans. The meals are often quite large as the nestlings may have to fast for several days while the parents travel long distances to find more food.

Emperor Penguin - 45c
The emperor penguin can weigh up to 46 kilograms and stands approximately one metre tall - the largest and heaviest penguin species in the world. Apart from its size, it is also easily distinguished by the bright yellow upper-breast feathers. While normally a very sociable bird, they do have a tendency to fight with each other, steal from their neighbours and quarrel with their mates. All this activity is accompanied with raucous, unmelodic screeching.

Chinstrap Penguin - 50c
A small penguin, the chinstrap has distinctive markings - the top and back of the head are black with a thin black stripe running under the chin. Breeding success in crowded rookeries depends on the ability to defend the nest area even while occupying the nest. Suitable nesting materials are normally in short supply and stealing pebbles other nests appears to be a constant activity. The normal clutch of eggs is two - due to the constant demand for food and attention from their young, they cannot successfully raise more than two chicks at a time.

Adelie Penguin - 70c
The adelie penguin is attractively formed and coloured though more squatly proportioned than other penguin varieties. It is adept at catching fish, diving to depths of up to 100 metres. Adelie penguins are prolific, with more than one million pairs breeding around the Ross Sea region in 34 sites. The closest breeding site to Scott Base or McMurdo Station is Cape Royds. A layer of subdermal fat which thickens to 20 millimetres at the start of the breeding season protects and insulates them from the vagaries of the Antarctic weather conditions as they nest. Unlike some other more northern species the Adelie do not burrow but nest at ground level.

Elephant Seal - 80c
While other seal species rely on krill as a staple in their diet, the main food of the elephant seal is squid. Not a common inhabitant of the Ross Sea region, the elephant seal is more often seen on and around subantarctic islands where squid is readily found. In earlier days they were hunted almost to the point of extinction, for their thick, oil-rich blubber. Being strong breeders and with only one important predator, the killer whale, elephant seal populations have grown again.

Leopard Seal - $1.00
The leopard seal is equipped with powerful jaws and teeth, and can move rapidly in the water and on shore. The side-to-side writhing movement, similar to that of a snake, enables the leopard seal to stalk and catch unsuspecting and slow moving penguins in their rookeries. Penguins are not the only prey of the leopard seal, with fish and krill making up the majority of the food intake.

Weddell Seal - $2.00
The weddell seal is larger and more placid than the leopard seal and can be approached far more safely. It has no surface predators and so can often be seen dozing away the summer hours on the sea ice. The ability to dive to great depths and remain underwater for long periods is only exceeded by sperm whales and elephant seals. The weddell seal can stay under water for up to 70 minutes, if necessary, and it can dive to 600 metres in the icy waters of the Antarctic. The large eyes placed high on the head are to help navigate these depths and to allow the seal to see above without moving the head and affecting the streamlined swimming posture.

Crabeater Seal Pup - $3.00
The teeth and jaws of the crabeater seal are weaker than those of the other seal species, though the cheek teeth are elaborately lobed for straining or sieving krill - their almost exclusive diet. The pups, unfortunately, are regularly found dead, having become disorientated or trapped by reforming winter ice. It is unknown why this occurs far more often with the crabeater seal than any other seal species. The seals normally live in the pack ice and only enter McMurdo Sound in the late summer when the last ice has broken out.