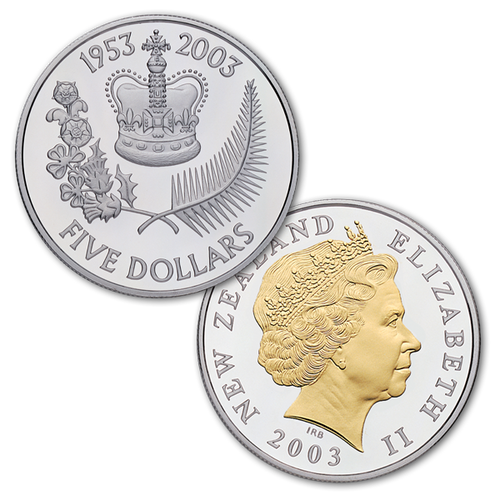 New Zealand Post was privileged to bring to you this exquisite $5 coin to celebrate the 50th anniversary of the coronation of Her Majesty Queen Elizabeth II in 2003.

Unique to New Zealand, the coronation coin was a fitting tribute to a long and distinguished reign and followed the Queen Elizabeth II - Golden Jubilee coin that was issued in 2002.

This commemorative silver frosted $5 coin, lavishly presented in a Royal purple velvet case, depicted an image of the St Edwards crown between a stylised sprig of roses, thistles, shamrocks and the New Zealand fern frond on its reverse. The dates ‘1953’ and ‘2003’ appeared above the Crown whilst below, the words ‘FIVE DOLLARS’ are displayed.

The combination of the fern, rose, thistle and shamrock represented the recognised offical floral emblems of New Zealand, the United Kingdom of Great Britain and Northern Ireland. These emblems were among those embroidered on the Queen’s coronation gown, which was also worn when she opened the New Zealand Parliament on 12 January 1954. The St Edward’s crown was used in the actual coronation service in 1953. In 1956 a heraldic version of this crown replaced the crest (originally granted in 1911) in the New Zealand Coat of Arms.