2005 The Chronicles of Narnia - The Lion, The Witch and the Wardrobe Brilliant Uncirculated Coin - Aslan 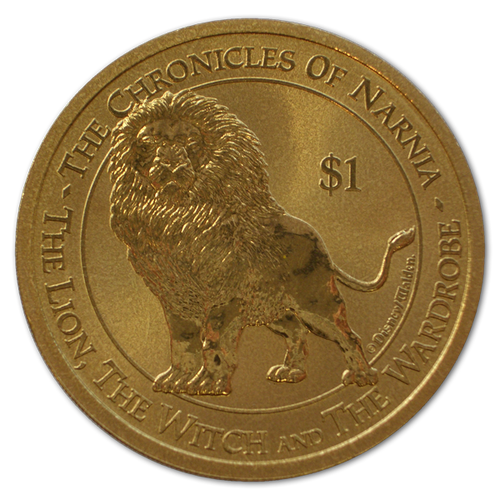 2005 The Chronicles of Narnia - The Lion, The Witch and the Wardrobe Brilliant Uncirculated Coin - Aslan

A carefully crafted image of Aslan was featured on this brilliant uncirculated coin.

The Great Lion, the King of the Wood, Aslan radiates solemnity and joy, strength and gentleness, fury and tenderness. When the children first hear Aslan’s name, they feel hope. When they first see him, his golden power overwhelms them. When he speaks their names, they know they have met their greatest and truest friend. Though the mere sound of Aslan’s name comforts the children, the dangerous responsibility being placed on them tests their courage. The children must join him and fulfil the ancient prophecy. Aslan leads the children to the castle of Cair Paravel, where he crowns them Kings and Queens of Narnia in a joyous celebration. The children rule wisely and justly for many years, growing into noble adults. One day while out riding, they enter a thicket that becomes a wardrobe, tumbling out into the Professors house, children once more.

This brilliant uncirculated coin featured a striking image of the lion Aslan and came packaged in a collectable display card.