2005 The Chronicles of Narnia - The Lion, The Witch and the Wardrobe Silver Proof Coin with Gold Plating - The White Witch 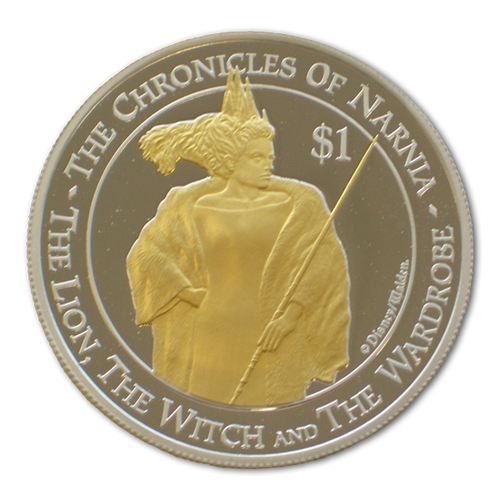 2005 The Chronicles of Narnia - The Lion, The Witch and the Wardrobe Silver Proof Coin with Gold Plating - The White Witch

This silver proof coin potrayed an image of the brutal dictator - the White Witch - who ruled Narnia through pure, icy terror.

Narnia is ruled by the cruel, icily beautiful White Witch. Her frosty elegance echoes the coldness in her heart. Hardened by pride and power, she has frozen Narnia. Though she calls herself “the Queen of Narnia”, the White Witch isn’t royalty - she’s a dictator, ruling through pure, icy terror. She took Narnia by force, and has reigned over it for one hundred terrible years. She knows the old prophecy that when four human children come to Narnia, her evil reign will end, so she commands Edmund to lure his brother and sisters to her and their doom. The children learn more about the Witch’s ruthless rule. She commands legions of evil minions and turns anyone who defies her into stone.

Struck to the exceptionally high standards of the Royal Australian Mint, this fine silver coin had been selectively plated with gold to enhance the coin’s design. The reverse of the coin displays a carefully crafted image of the White Witch, a character from The Chronicles of Narnia - the Lion, the Witch and the Wardrobe; while the obverse contained Ian Rank-Broadley’s effigy of Her Majesty Queen Elizabeth II.