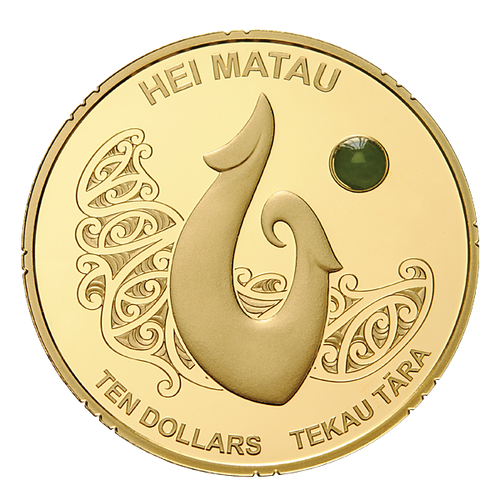 Very first 1 troy oz 0.9999 gold coin that New Zealand Post has produced
Piece of pounamu (New Zealand greenstone) set into the coin
The rim of the coin is etched with notches, said to be the oldest type of carving recorded
Extremely low worldwide mintage of 250
New Zealand legal tender (first time to have the face value in Māori and English)
Housed in a waka huia (Māori treasure box) made from Kauri.

The significance of the hei matau and its associations with navigation, abundance of seafood, mana and knowledge are reflected in the themes of the coin design. The raised pattern on the coin behind the hei matau is based on a traditional Māori kōwhaiwhai (frieze) pattern called ‘koiri’ (to sway/bend) combined with the traditional whakairo (woodcarving) pattern unaunahi (fish scales).

Koiri suggests the swaying of seaweed and the changeable nature of the wind, while unaunahi suggests the movement of shoals of fish. The combination of designs gives rise to the image of a fishing waka (canoe) traversing the ocean’s waves and currents.

Set to the right of the hei matau is a round cabochon of pounamu. Pounamu is a taonga (treasure) held in high esteem by Māori, and the export of pounamu from New Zealand is restricted. The pounamu cabochon is symbolic of the moon, which governs the rise and fall of the tides in the realm of Tangaroa (god of the sea). The notches on the edge of the coin, some say, are the oldest type of carving recorded. The groups of two notches represent strength and abundance, while the groups of three notches refer to three stages of creation (epochs of time): Te Kore (the nothingness), Te Pō (the darkness) and Te Ao Mārama (the world of light).

For the first time, these New Zealand legal tender coins feature the face value of the coin in both English and Te Reo Māori (the Māori language).

Beautifully presented in a waka huia

This 1 troy oz gold proof coin is housed within a waka huia (ornamental carved vessel for taonga) made from kauri - native New Zealand wood. The pattern adorning the waka huia has been designed and
hand-carved by Thomas Hansen.

The lid design of the waka huia continues the navigational theme of the coin in the form of a contemporary pattern called ‘pai arahi’ (fortuitous ocean journeys). On either side of the handle are three koru/pïtau (unfolding curls symbolically representing new growth/new beginnings). The handle on the lid represents the barb of Lewis Gardiner’s hei matau rising out of the sea, while the two notches on the barbs symbolise strength and abundance.

2014 Scenic Definitives - A Tour of Niue Set of Value Blocks