2018 Round Kiwi Set of Cancelled Stamps 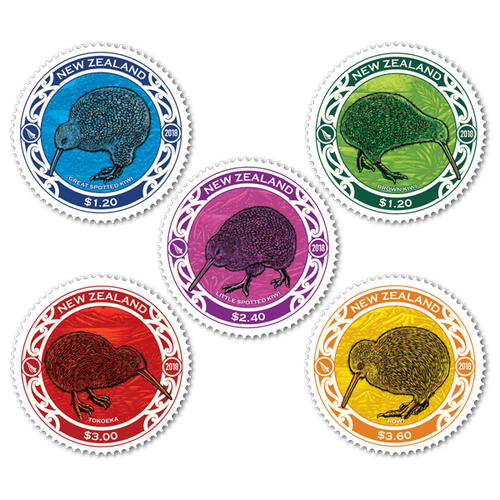 2018 Round Kiwi Set of Cancelled Stamps

The brown kiwi is the species many New Zealanders think of when kiwi are talked about. Familiar to communities in northern parts of the North Island, it is also the species most commonly seen in captivity. The brown kiwi usually lays two eggs a clutch, and lays one to two clutches a year, as opposed to the more usual one egg per clutch in other species. Sadly, predators and loss of habitat undo much of this good reproductive work.

Great spotted kiwi / roroa is the largest species of kiwi, found only in the northern South Island. Great spotted kiwi are New Zealand’s least known species of kiwi, but we know that their numbers are dwindling despite living in harsh environments where conditions are tough even for a stoat, dog or cat. At nesting time, incubation is shared between the male and female parents.

Little spotted kiwi is the smallest of the five kiwi species. The majority can be found on Kapiti Island, a bird sanctuary off the west coast of the North Island. Through successful translocations, little spotted kiwi are also now found on several other predator-free offshore islands, and in Auckland’s Shakespear Sanctuary and in Wellington's Zealandia Sanctuary. Male calls are heard more often than females', but sometimes a male and female pair can be heard calling back and forth in duet.

Tokoeka has four geographically and genetically distinct forms: the critically threatened Haast, the mountain loving northern Fiordland and southern Fiordland, and the Rakiura (Stewart Island) which is unusual among kiwi for being active in daylight. Rakiura offspring also act as 'helpers' with incubation by sitting on the egg for a small part of the day.

Rowi are the rarest of the five species of kiwi. There is only one natural population of about 550 rowi, which reside in Ōkārito forest and surrounds in South Westland. They can also be found on three predator-free islands near Cook Strait. Unlike some other kiwi species, male and female rowi take turns incubating their eggs. Rowi juveniles often stay with their family group for years.

2018 Round Kiwi Set of Stamp Sheets

2018 Round Kiwi Set of Used Stamps