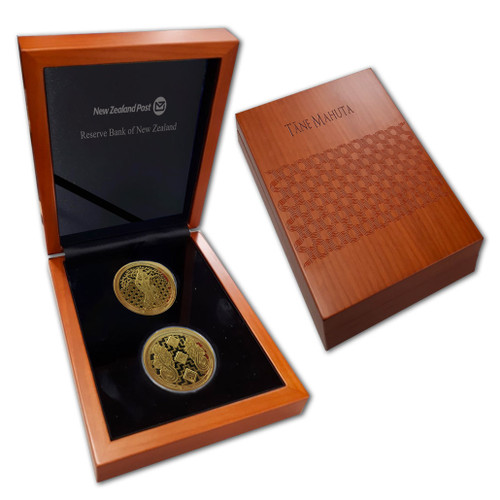 Māori myths and legends imbue all facets of life in Aotearoa (New Zealand). Stories about Tāne Mahuta, the atua (god) of the forests and all who reside within them, are well known throughout Aotearoa. These coins depict the story of Tāne and how he acquired the three baskets of knowledge. Tāne was confronted by his jealous brother Whiro, the atua of darkness, and his underlings. Tāne had to best them to reach the 12th heaven, where he was escorted by attendants into the presence of Io-Matua, the Supreme God, and bestowed with the three baskets of knowledge.

These coins have been designed by David Hakaraia, the designer of the NZ Post Māui coin series. They portray the story of Tāne Mahuta, the god of forests and birds, who brought the baskets of knowledge to Earth. One coin depicts the god Tāne Mahuta, who is embodied in the living world as a towering, sacred kauri tree. The second coin depicts poutama (the stairway to attainment of knowledge), the messengers of Io (the supreme spiritual power) and the three baskets of knowledge:

Contains sacred knowledge of ritual, memory and prayer, which relates to the creation of the natural world.

With ancestral knowledge of matters beyond space and time, te kete Tuatea carries our experience of connections with one another and with the past.

This basket contains the knowledge that could assist mankind: knowledge of love, peace and the arts and crafts. It is also regarded as the basket of literature, philosophy and humanities.