25th Anniversary of the Moon Landing 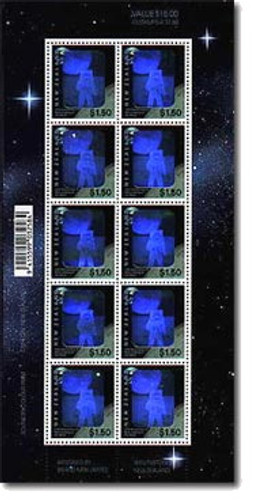 25th Anniversary of the Moon Landing

The names of Neil Armstrong and 'Buzz' Aldrin have become part of world history, being the first men to walk on the moon.

On 21 July 1969 (New Zealand Time) man first set foot on the moon. The American astronaut Neil Armstrong, commander of Apollo 11, watched by millions of television viewers round the world, stepped off the ladder of the lunar module, Eagle, on to the moon. "That's one small step for man, one giant leap for mankind," he said.

New Zealand Post paid tribute to these astronauts and celebrated the 25th anniversary of their historic moon landing with an historic event of its own: the launch of New Zealand's first hologram stamp depicting an astronaut walking on the moon with the earth and New Zealand in the background.

The stamp was produced in sheetlets of 10 with the selvedge depicting outer space.

The hologram, which was designed by New Zealand Post, was produced by Woodmansterne of England and applied to the printed stamp by Southern Colour Print.

Product Listing for 25th Anniversary of the Moon Landing