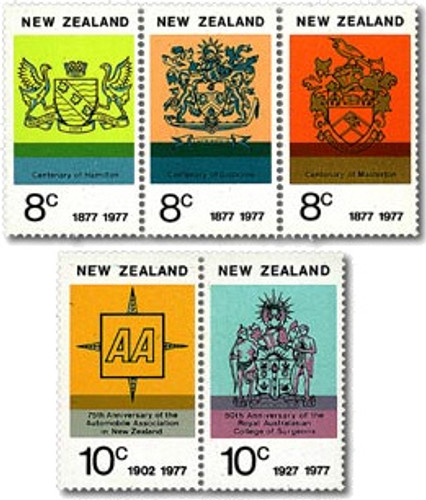 In 1977 New Zealand Post celebrated a range of anniversaries with this commemorative stamp issue.

Se tenant strip of three stamps - 3 x 8c
Hamilton, Gisborne and Masterton all celebrated their centenaries in 1977. Hamilton is situated on the Waikato plains on the banks of the Waikato River, 80 miles from its mouth.  The city, surrounded by hills, lies in a basin comprising rolling land and low hills.  Gisborne is situated on the shores of Poverty Bay where the Taruheru and Waimata Rivers join to form the Turanganui River.  Masterton is situated at the northern part of the Wairarapa Valley and in the upper basin of the Ruamahanga River.

Se tenant strip of two stamps - 2 x 10c
The New Zealand Automobile Association Inc celebrated its 75th Anniversary in 1977. The total membership of the Association is over 600,000 and the issue of this stamp acknowledged the work done by this organisation since the early days of motoring in New Zealand.

The Royal Australasian College of Surgeons celebrated its 50th Anniversary in 1977. The College in Melbourne, is responsible for training nearly all the surgeons and anaesthetists in Australia and New Zealand.  New Zealand has been actively involved since the first council of the College was elected in 1927 - one of the two Vice-Presidents then was Louis Barnett of New Zealand.