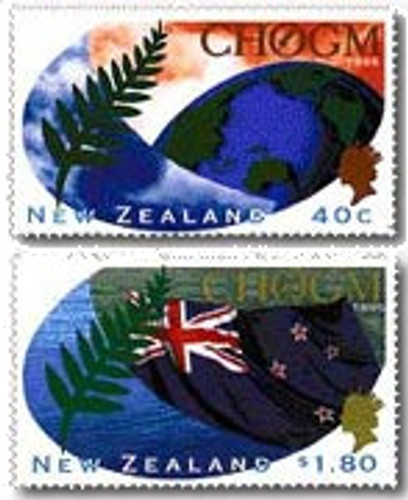 This significant event was held in Auckland and was attended by approximately 1,500 people including the Heads of State of all Commonwealth Nations and Her Majesty Queen Elizabeth II who does not attend the meeting but visits the host country at the time of the meeting to meet the Commonwealth Leaders..

Held every two years in different countries, CHOGMs are noted for giving Commonwealth leaders the opportunity to meet and exchange views in an informal setting. Pomp and ceremony are kept to a minimum. Resolutions are reached, not by voting, but rather by extensive consultation and arriving at a consensus.

New Zealand Post commemorated this occasion with a special issue of two stamps - 40c and $1.80 - together with a first day cover.