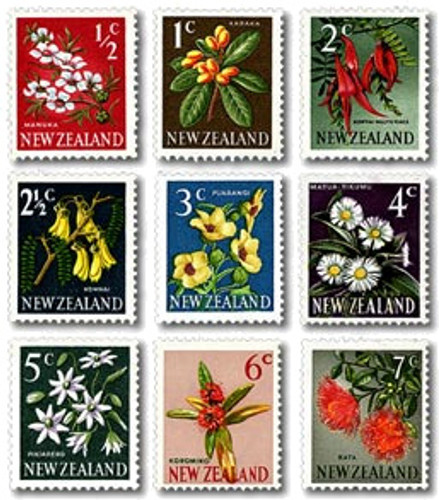 The planning of the 1967 definitive set commenced as early as July 1964 but it was not until January 1966 that preliminary notice was given by the New Zealand Post Office that decimal currency stamps would be put on sale on 10 July 1967, the day when New Zealand would begin the conversion to decimal currency.

It was decided that as there was insufficient time to have a new set of pictorial stamps designed and printed, the design and colours of the existing 1960 Pictorial issue would be retained.

Manuka - 1/2c
Manuka 'Leptospermum scoparium' also commonly called the tea tree, is a bushy shrub found in most parts of the country.  The flowers are mostly white, appear in profusion and often almost hide the small reddish-green leaves.  The woody fruit have five narrow slits through which the seeds escape.

Karaka - 1c
The karaka 'Corynocarpus laevigatus' is a tall tree of the coastal forest and also occurs in picturesque isolated groves casting a welcome shade on rocky foreshores.  The dark green glossy leaves reach a length of over 15cm. Inconspicuous greenish flowers give rise to full clusters of richly coloured berries that ripen in strong summer sun.

Kowhai-ngutu-kaka - 2c
The name kowhai-ngutu-kaka shows that the Maori recognised the close relationship between this plant and the yellow kowhai, at the same time likening its flowers to the beak of a native parrot, the kaka.  A soft woody shrub rarely exceeding 1.8 metres, the kaka beak 'Clianthus puniceus', as it is commonly known, has curved and pointed red flowers about 10 cm long.

Kowhai - 2 1/2c
Generally regarded as New Zealand's national flower, the yellow kowhai 'Sophora microphylla' is easily grown and is widespread both in its native state and as an ornamental tree in gardens.

Puarangi - 3c
'Hibiscus trionum', the botanical name of the plant known to the Maori as puarangi, is the smaller of the two New Zealand hibiscus.  It belongs to the northern frost-free part of the country and can now be seen only in remote places and on some off-shore islands.

Matua Tikumu - 4c
Commonly known as the Mountain Daisy, there are many varieties found in the mountain districts of both North and South Islands.  The leaves are covered with a velvety coating of fine hairs and the flower rays are white and daisy-like, being up to 100mm in diameter.

Pikiarero - 5c
In most lowland forest areas of New Zealand spring is heralded by the flowering of the climber now called 'Clematis paniculata' but formerly known as 'Clematis indivisa'.  The white blooms, more than 50mm across are borne in masses when the vines reach the full light of the tree tops or the forest edge.

Koromiko - 6c
Koromiko or 'Hebe salicifolia' is a native shrub of which there are seven main species.

Rata - 7c
Rata 'Metrosideros robusta' (northern variety) or 'Metrosideros umbellata'  (southern variety) , like Manuka, belongs to the myrtle family.  The vines affix themselves to tree trunks and rocks by short roots from the stems.  The flowers are conspicuous because of the bunched stamens, which in this species are 25mm long, reddish-orange and tipped with yellow pollen when freshly opened.  Flowering amongst the tree tops or in roundish clumps in partly-cleared country, the rata provides a splash of colour in winter.