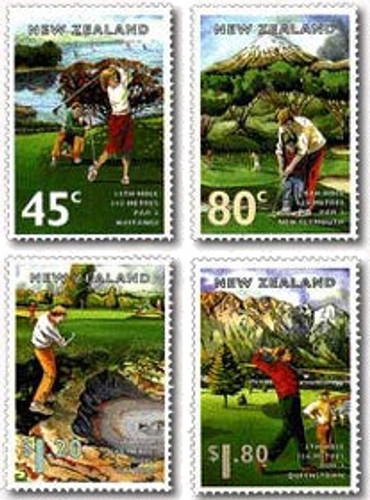 The game of golf followed the Scots to New Zealand. It all began in Dunedin, when a young whisky distiller named Charles Howden called a meeting to form a golf club in 1871. The game grew slowly when a surge in its popularity in Great Britain was mirrored in the colonies.

In 1899 a national golfing body was formed in New Zealand. In recent decades the game has boomed. In 1995 nearly 113,000 registered golfers now enjoy the sport year round. Just as New Zealand is well known worldwide for its beauty, so too are its golf courses. This special issue of golf stamps depicted four of the country’s most attractive golfing venues. Each of these courses provide a showcase for the natural splendour of their region.