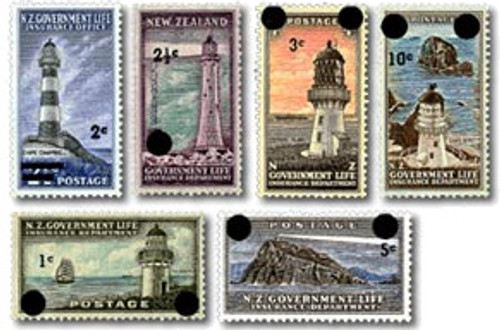 Due to the change to decimal currency on 10 July 1967, a quantity of the 1947 Government Life stamp issue was overprinted by the New Zealand Government Printer with decimal values to ensure there would be enough stock to last through until 1969 when a new set of stamps was planned. Additional supplies were also ordered from Bradbury Wilkinson and Co.

The stamp designs depicted the following lighthouses: Taiaroa, Cape Campbell, Eddystone, Stephens Island, The Brothers and Cape Brett. These special stamps were for use solely by the Government Life Insurance Office, the first such issue was in 1891.

Taiaroa - 1c
One of the earliest lighthouses erected in New Zealand, this light came into operation on 2 January 1865.  Situated 58 metres above sea level at the southern side and seaward entrance to Otago harbour, the Taiaroa Head Light guided shipping into Port Chalmers, the port city of Dunedin.  The tower was built from stone quarried on the site.

Cape Campbell - 2c
The 22 metre tall Cape Campbell lighthouse, guards the south-eastern approach to Cook Strait. Erected originally in 1870 as a timber structure, the tower was rebuilt in steel during 1905 and the lamp electrified in 1938.

Eddystone - 2 1/2c
This is the most famous beacon on the British Coast is situated about 14 kilometres from the Cornish Coast, and 22 kilometres S.S.W. of Plymouth. The first lighthouse erected here was built of timber by Henry Winstanley in 1696 and enlarged and completed in 1699.  In a great tempest in 1703 the lighthouse was swept away, carrying with it its hapless architect and five keepers. In 1708 a new lighthouse of stone and wood was erected. Weathering storms for half a century it was eventually destroyed by fire but did become the prototype of all modern lighthouses, A stone lighthouse was built in its place in 1759 which was in turn replaced in 1882 by the lighthouse depicted on the stamp.  The tower is 40 metres high with a light visible for 28 kilometres.

Stephens Island - 3c
This light positioned to guide shipping passing through Cook Strait, is situated off the northern tip of D'Urville Island and is approximately 96 kilometres in a direct line N.W. of Wellington and about the same distance N.E. of Nelson.  It also marks the eastern entrance to Tasman Bay on the north. The powerful light came into operation on 29 January 1894.

The Brothers - 5c
The Brothers lighthouse is built on one of a small group of rocky islands off the north coast of the South Island and at the narrowest part of Cook Strait.  Built about 70 metres above sea level the light came into operation on 24 September 1877.

Cape Brett - 10c
Situated about 32 kilometres due east of Waitangi, Bay of Islands, Cape Brett lighthouse first came into operation on 21 February 1910.  It was one of the first of its kind in New Zealand in which the light machinery revolved in a mercury float.  The cast iron tower was made in New Zealand, the lantern, machinery and light apparatus being imported from Great Britain. The island depicted on the stamp is Piercy Island.  Through this island is a beautiful archway which launches are able to navigate.