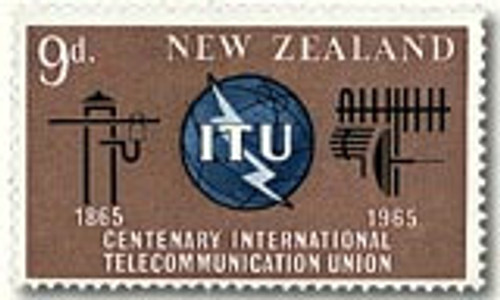 New Zealand, in common with other members of the International Telecommunication Union, issued a special stamp in 1965 to commemorate the centenary of the organisation. The Union, which has its headquarters in Geneva was formed in 1865 and is the oldest of the international organisations which are now specialised agencies of the United Nations. The purpose of the Union is to maintain and extend international co-operation in the use of telecommunications of all kinds.

The Administrative Council of the Union asked associated countries to produce a common symbolic design.  A globe and telecommunication symbols were decided upon. The date of issue in New Zealand and most other countries was 17 May 1965, although Great Britain issued their stamp on 15 November and Jamaica on 29 December.