In 2019 the New Zealand Government announced that there was to be more New Zealand history taught in schools. This came after growing calls from New Zealanders, particularly young people, who were literally crying out for Aotearoa New Zealand’s historic narratives to be made available to them throughout their education. More and more Kiwis have become curious about New Zealand’s past, and wish to face colonisation and other difficult historic events head on. The people of Aotearoa New Zealand appear to be ready to think about the impacts of the past and what they mean for our future.

In response, the Government has promised that the following topics will be taught in all schools from 2022. According to the Government’s website, the history curriculum will span the full range of New Zealanders’ experiences and is expected to include:

It’s an exciting time, and while many of these topics require careful and thoughtful application, there are lots of opportunities to explore a rich variety of history topics. It’s on this premise that NZ Post decided to produce a set of stamps showcasing a few aspects of New Zealand’s 19th-century history. 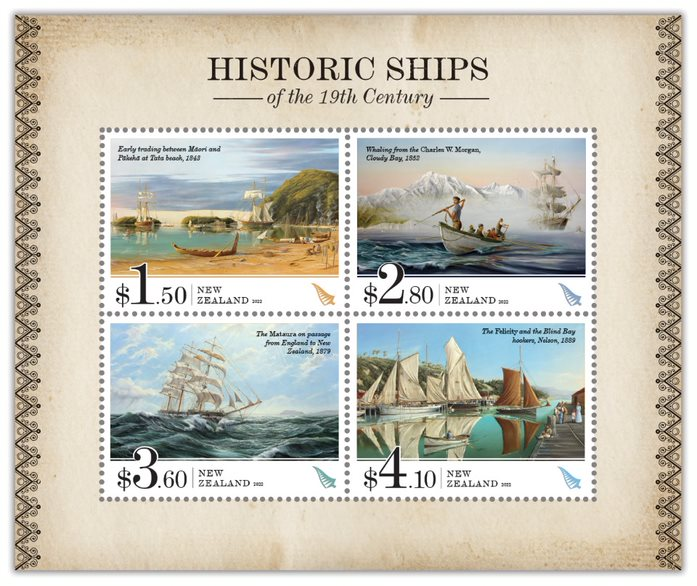 NZ Post’s stamps often reflect commemorative or historic moments. An important anniversary is often the impetus for a stamp issue, so when the opportunity to feature a series of historic maritime scenes painted by Sean Garwood came about, we really needed to think about why, given there wasn’t a historic commemorative event to focus on. Given the new history in school curriculum and that we thought a 19th century historic ships issue would appeal to our regular customers, it seemed timely, and we decided to go ahead.

Our second challenge was which scenes to include given this was to be a four-stamp set. After reviewing all twenty-five of Sean Garwood’s paintings, the four scenes that were chosen focused on 19th-century colonial history, with each stamp reflecting a different story. The stamps include scenes depicting trade and exchange between Māori and Europeans, whaling, European settlers arriving by sea onboard a ship in rough seas, and a harbour scene with little sail boats commonly used to transport settlers and their belongings to their destination of choice.

Historians reviewing the draft history curriculum have suggested it should focus on New Zealand history in the world context. These scenes, although located in New Zealand, depict the comings and goings of people both from abroad and within Aotearoa New Zealand. 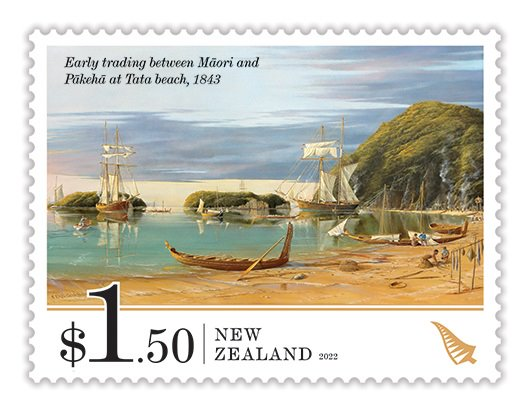 I find this stamp particularly compelling because it depicts a pivotal aspect of our history. It also provides an opportunity for exploration and discussion, particularly regarding Māori life both prior to European settlement and after colonisation.By 1843 Māori dominated and controlled the trade scene, an interesting development considering Māori didn’t practise commercial market transactions prior to the arrival of Europeans. Not only is there food for thought in terms of early Māori society and economy, but that Māori quickly adapted and made the most of the opportunities presented once Europeans arrived.

Developments thereafter are equally important to investigate. As the 19th Century progressed, an onslaught of European settlers ensued and settled towns became increasingly self-sufficient and less reliant on Māori. Alongside the loss of land, Māori participation in the developing New Zealand economy declined. The loss of Māori land and how this occurred and the Treaty of Waitangi and how it was or wasn’t adhered to are arguably some of the most significant parts of our history, yet they are not necessarily well understood by general public. As a former history curator, I’m really excited by the way an object, picture, image, or painting can provide a window into rich and complex histories.

While each of these stamps tells a particular story, they also work together as a set, touching on a variety of interrelated threads of 19th-century history. While some people will enjoy each as a snapshot in time, it’s my hope that others will take the time to delve more deeply or perhaps begin a journey of discovery into the histories that have had an impact on the people and places around them.