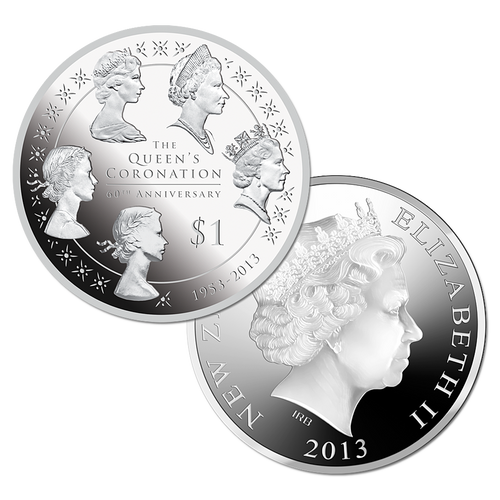 A coin to celebrate the six decades that Her Majesty Queen Elizabeth II has served as New Zealand's graceful monarch.

Minted from 1oz pure silver, this legal tender commemorative coin has a worldwide mintage of 1953 - the year in which the Queen's Coronation took place.

The design of the coin features the six main portraits of the Queen that have appeared on New Zealand legal tender coins. The frosted finish and three-dimensional relief applied to the portraits provide a striking contrast to the polished background. The first five portraits are beautifully engraved on the reverse side of the coin, while the obverse side of the coin features the Queen's portrait that appears on New Zealand coins today - designed by Ian Rank-Broadley.

The coin design shows how the Queen has changed through the years - from a youthful Queen in Mary Gillick's 1953 design to an experienced monarch in Ian Rank-Broadley's 1999 design.

Packaged in an elegant case with an accompanying individually numbered certificate of authenticity, this is a coin that will be treasured by royal enthusiasts for years to come.