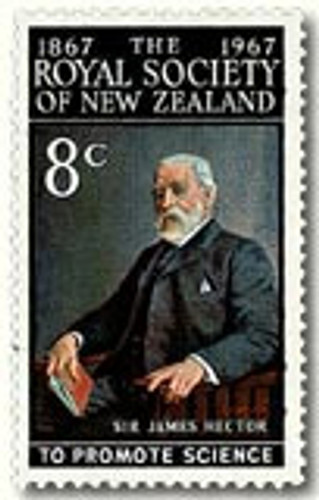 The Royal Society of New Zealand was constituted under the New Zealand Institute Act of 10 October 1867 and to mark its centenary two commemorative stamps were issued.

At the request of the Society one design linked the Society with the promotion of science in New Zealand, and the other featured a portrait of Sir James Hector, founder of the Society.  These stamps were the first New Zealand commemorative stamps to be issued in metric currency.

4c
This stamp depicted Mt Aspiring as a symbol of high endeavour with the Southern Cross and Aurora Australis in the background.  Also featured is a vertical panel incorporating elements representing the scientific interest of the Society: geology, mining, botany, zoology and biology.

8c
This stamp depicted a portrait of Sir James Hector.  Sir James Hector was an geologist and explorer who was born in Edinburgh in 1834. He came to NZ in 1862 to conduct a geological survey.  In 1871 he became a member of the first senate of the University of New Zealand.  In 1885 he was elected Chancellor of the University, a position he held for 18 years; and he was three times President of the Australasian Association for the Advancement of Science. Hector died in 1907.