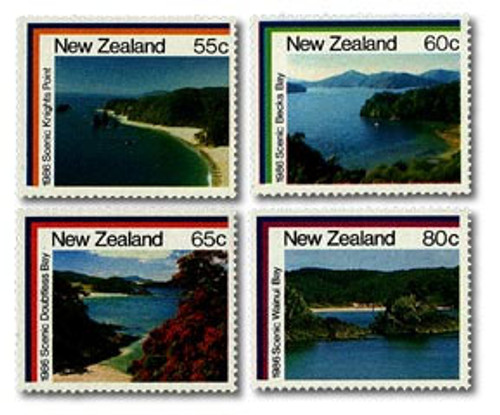 A remnant of a continent long since lost into the depths of the ocean, New Zealand is alone and isolated. Its geographical position places it at a greater distance from continental masses than any other island of similar size. Surrounded on all sides by the sea, New Zealand displays a long, narrow country enjoying approximately 6,900 kilometres of coastline. The landscapes vary from pure drama to breathtaking beauty and provide New Zealanders with numerous leisure activities.

The magnificent strength of the ocean is in evidence on broken shorelines, thundering onto the long stretches of isolated, remote beaches and crashing around rugged capes.  Deep water harbours add their own dramatic touches in contrast to the sheltered inlets and calm bays where the water laps in idle rhythm.  Highways border much of the coast and provide spectacular travelling around the country.  Coach or car take you from subtropical Northland with its sheltered bays rimmed with crimson-flowering pohutukawa trees to the drama of Fiordland with its towering cliffs and deep waters.

The beauty and tranquillity of New Zealand's coastal scenery is depicted in this stamp issue.  Two bays in both the North and South Islands are featured.

A miniature sheet featuring a full scene of Wainui Bay with the 80c stamp perforated in the centre of the sheet was released with this issue.  Proceeds from the sale of the miniature sheet went to supporting 'New Zealand 1990' World Stamp Exhibition held in Auckland 24 August - 2 September 1990.

The miniature sheet released with this issue was also produced with a Stockholmia '86 overprint to mark New Zealand Post's attendance at the Stockholmia '86 World Philatelic Exhibition in Stockholm, Sweden.